President Aquino is convinced Sen. Grace Poe meets his primary requirement for his successor: the capability to continue the programs highlighting the gains of his administration.

In a radio interview on Thursday, Aquino said he spoke with Poe “because we believe she is going in the right direction.”

“We worked hard for [the gains of my administration]. We worked on them with blood, sweat and tears so they could become permanent and not just last for six years,” Aquino said.

“And we believe that Sen. Grace Poe is one of those we expect to continue, and can really continue, [what we have started],” the President said.

Aquino has begun talking with prospective administration candidates for 2016, including Poe, who ranks second to front-runner Vice President Jejomar Binay.

But it seems that other political parties want to be touched by Grace.

Add the PDP-Laban to the list of her possible suitors.

Sen. Aquilino Pimentel III on Thursday said PDP-Laban members want Poe to be the running mate of Rodrigo Duterte should the mayor of Davao City decide to run for the presidency.

“That would be a good balance,” Pimentel told reporters.

He added, however, that the PDP-Laban has yet to talk to Poe.

The party, he said, will approach Poe once Duterte gives his clearance. Duterte himself has yet to decide whether to run for President.

The opposition United Nationalist Alliance has also said it is considering Poe as a running mate for Binay.

Poe, however, has said she has yet to decide whether to run for higher office.

Pimentel said Poe would have to be the vice-presidential candidate in a team-up with Duterte, because the latter was not a good fit for the position of vice president.

“[Duterte] is a tested chief executive. He’s not a tested vice to somebody. Number two, given his age, he’s ready. So he has enough experience,” Pimentel said. 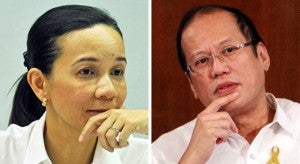 President Aquino (right) is convinced Sen. Grace Poe meets his primary requirement for his successor: the capability to continue the programs highlighting the gains of his administration. INQUIRER FILE PHOTOS

Pimentel shrugged off rumors that questions would be raised about Poe’s citizenship, the same issue that hounded her father, the late movie actor Fernando Poe Jr., when he ran for President in 2004.

Pimentel noted that Poe was able to run for senator, and the position has the same requirements as that for President.

“She was able to run for the Senate, she was able to sit as senator, and she is functioning as a senator. If there’s really an issue, it should have come out earlier,” he said.

“People should [know] which is a legitimate issue and [which is] a political issue,” he said.

President Aquino made it clear that the selection process had not been completed and he was not yet ready to announce the administration’s presidential candidate.

Interior Secretary Mar Roxas has long been considered the administration’s presidential candidate, having given way to Aquino in the 2010 elections.

But Roxas is doing poorly in the polls, while Poe, who has overtaken him, has emerged as a good option, even threatening to overtake Binay.

Roxas and Duterte were tied at third place with 15 percent.

But a member of Aquino’s Liberal Party (LP) urged Poe to first go through “internship” and run for vice president next year.

Iloilo Rep. Jerry Treñas, chair of the LP organizing and membership committee, said a number of senior LP leaders were optimistic that President Aquino would “anoint Roxas despite his poor survey ratings because of his competence and commitment to continue the various reforms that were set into motion by his administration.”

Treñas said Poe, who met with the President two weeks ago, would be better off running under the LP as vice president and run for president in 2022.

“Senator Poe is a charismatic and very capable leader but it would be best if she would go under internship first so that she can further master the needed skills in the executive branch. Roxas, on the other hand, is ripe and ready for the presidency, having been one of the country’s most outstanding legislators and now a brilliant troubleshooter and trusted adviser of the President,” Treñas said.

Other LP members are batting for Poe as the administration’s standard-bearer in 2016 because the recent surveys show she has better chances of beating Binay than Roxas.

But Roxas’ supporters in the LP are persistent.

Western Samar Rep. Senen Sarmiento, LP secretary general, said a Roxas-Poe combination endorsed by the President would be the team to beat in 2016.

“Mar has the experience and Poe has the material to develop,” said Sarmiento, who noted that the final decision will be announced after the LP’s National Executive Council has decided the matter.

Caloocan Rep. Edgar Erice said a Roxas-Poe team would give voters a continuation of President Aquino’s anticorruption program for another six to 12 years.

For Treñas, Roxas could still win the race for Malacañang with Aquino’s endorsement and with Poe as his running mate.

“President Aquino will remain a powerful endorser because of his outstanding performance in turning the country’s economy [into] the second-fastest growing economy in the world and his success in fighting corruption in [the] government and in defeating poverty,” Treñas said.

Aquino: Grace Poe among those who can continue my reforms