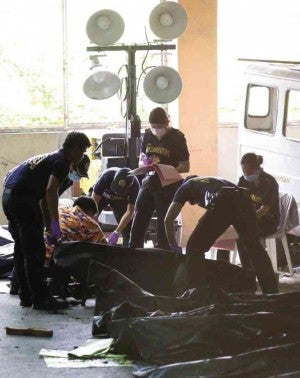 GRIM TASK Scene of the Crime Operatives begin identifying some of the victims in Wednesday’s Valenzuela City factory fire which left over 70 workers dead.

As the death toll rose to more than 70 in the May 13 fire that razed a footwear factory in Valenzuela City, the Department of Labor and Employment (DOLE) said the families of the dead and the injured workers should receive all the benefits their company owes them, on top of the financial aid coming from the government.

The DOLE on Thursday said it would conduct its own probe of the workplace tragedy even as a militant labor group offered legal assistance and urged the grieving families to file criminal charges over the “industrial inferno.”

Labor Secretary Rosalinda Baldoz said the family of each worker who died could receive around P20,000 in funeral and death pension benefits, while fire survivors who were hospitalized may be entitled to medical benefits at P200 per day for up to 120 days. The financial aid will be provided through the department’s Employment Compensation Commission.

Baldoz also noted that at least 33 of the workers confirmed dead as of Thursday were members of a labor union that forged a five-year collective bargaining agreement (CBA) with the management of Kentex Manufacturing Corp. in 2012.

DOLE-National Capital Region Director Alex Avila will be reviewing the CBA to determine the benefits the workers must receive. “On top of these financial obligations, the workers are also entitled to other social security benefits of the Social Security System, PhilHealth and Pag-Ibig Fund,” Baldoz said.

In a statement, Baldoz said DOLE would conduct its own investigation of the tragedy, particularly regarding of the victims’ working conditions, in the interest of “social and labor 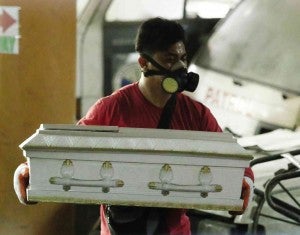 Some of the victims’ bodies were so badly charred that only the bones were left and these could all be contained in caskets meant for children (left). Lyn Rillon

justice.” DOLE officials had yet to inspect the site as they wait for the Bureau of Fire Protection and the Philippine National Police to finish their probes.

According to Baldoz, Kentex was found to be compliant with general labor standards and occupational safety and health standards as of September 2014, for which it received a certification from DOLE.

A technical inspection conducted in January 2014 found the factory’s boilers used for heating to be in satisfactory condition, she added.

Meanwhile, the Bukluran ng Manggagawang Pilipino said the families of the fire victims could at least file a civil case to seek damages. “We should also check if safety standards were violated,” BMP chair Leody de Guzman said.

The BMP offered the services of its volunteer lawyers from the Legal Advocates for Democracy, recalling how the 1996 Ozone Disco fire in Quezon City led to the prosecution of local government and company officials. Jerry Esplanada and Erika Sauler

Read Next
Did you know
EDITORS' PICK
Harnessing technology for quality education
Philippines to bring home multiple Olympic medals for first time since 1932
Tips for a cheerful life
Petecio ‘blessed’ as Olympic gold quest continues
Connect to PH’s fastest network with new Signature Plan Lite at only P599 per month
Nesthy Petecio assured of Olympics bronze, ousts Colombian foe
MOST READ
Isko for 2022? Manila mayor takes a swipe at Duterte on live broadcast
Nesthy Petecio assured of Olympics bronze, ousts Colombian foe
Lacson bares talks with Robredo ahead of 2022 polls
Gordon in talks with Robredo for possible ‘partnership’ ahead of 2022 polls
Don't miss out on the latest news and information.