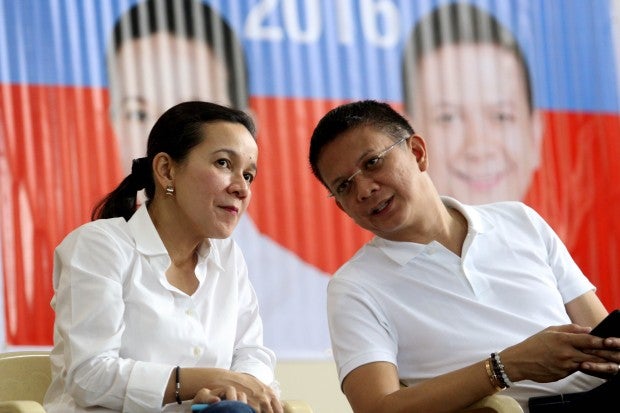 “No,” Escudero, Poe’s running mate in the May 9 elections, said in a text message when asked if he would change his position now that Poe has made her stand clear on the issue.

“We have agreed to disagree on this and some other issues. Diversity of opinion is to be expected in a democratic and free society,” he added.

But Poe, during the second presidential debate in Cebu on Sunday, raised her hand during the “Taas Kamay” segment of the debate when asked who among the candidates were in favor of bringing back capital punishment in the Philippines.

One of her rivals, Davao City Mayor Rodrigo Duterte, also raised his hand.

The “Taas Kamay” segment of the debate only allowed candidates to raise their hands if they agree on the questions asked of them without any explanation.

But Duterte managed to say that his support for the death penalty was only for drug cases while Poe said she was for it only for heinous crimes and also drug cases.

Their other two rivals present during the debate, Vice President Jejomar Binay and former Interior Secretary Mar Roxas, did not raise their hands on the question.

Asked again how he would reconcile his position with that of Poe if they both get elected in May, Escudero said: “We don’t have to. We can always espouse different things.”

“We cannot be the same on every issue. I respect her stand as she does mine,” he further said.

Poe, in an interview after the debate, explained that the death penalty could not be immediately imposed, saying the justice system in the country must be fixed first and that the proposal has yet to go through Congress.