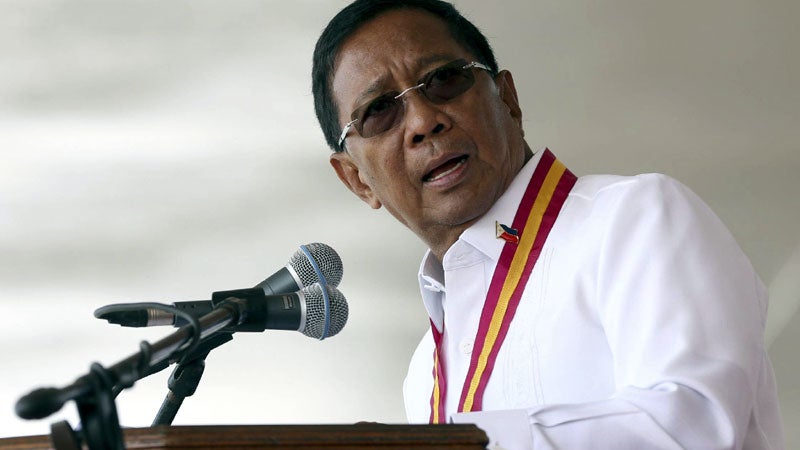 VICE President Jejomar Binay allegedly received “billions” of pesos from infrastructure projects while he was mayor of Makati City and used the amount coursed through dummies to fund his campaign in the 2010 elections, according to the Anti-Money Laundering Council (AMLC).

The AMLC finding was contained in a 62-page report, a copy of which was obtained by the Inquirer on Monday. It was the result of an investigation ordered by the Office of the Ombudsman in November 2014 in the midst of a Senate blue ribbon subcommittee into claims that Binay and his family illegally amassed wealth during his 20 years at the helm of the city.

The report, signed by Bangko Sentral ng Pilipinas Bank Governor Amando Tetangco Jr., chair of the AMLC, and members Teresita J. Herbosa and Dennis B. Funa, said that to hide the origins of the illicit funds, Binay and persons linked to him “engaged in layering, used third-party money launderers and made financial institutions as conduits.”

Binay’s camp on Monday night said it was “not aware of such a report” since AMLC reports are deemed confidential.

“The AMLC, however, has gone on record before the Manila Regional Trial Court that the Vice President has only one bank account, not 242. The total deposits for the said account is P1.7 million and not billions. And more importantly, the said account has been declared by the VP in his SALN (statement of assets, liabilities and net worth), SOCE (statement of contributions and expenses) and ITR (income tax return) for the year 2010,” said Joey Salgado, Binay’s communications director.

The report also said that the AMLC was authorized to file in the appropriate Regional Trial Court through the Office of the Solicitor General a petition for civil forfeiture against Binay and his dummies involved 139 bank accounts, insurance policies, securities and investments and real properties, including the 350-hectare property in Rosario, Batangas province, tagged as “Hacienda Binay.”

“The totality of the findings of the investigation shows that VP Binay derived funds from the various projects in Makati City—construction of the City Parking Building, the Makati Science High School Building, birthday cakes for senior residents—and used those funds for his election bid and for other personal purposes,” said the AMLC report.

The report said that in 2010 when Binay ran in the vice presidential race, his personal account had cash and check deposits amounting to P223,771,273.70, which he declared as part of election contributions.

But the AMLC said that money was not touched by Binay for his campaign expenses, which came from other bank accounts.

“It appears that the funds used by Binay for his election expenses in 2010 were sourced from checks drawn from the accounts of Limlingan, Crystal and Sedillo and Baloloy,” it said.

“They used a complicated and sophisticated system of layering funds, including the opening of multiple bank accounts under the names of close and trusted associates and entities whose officers and directors are the very same persons, and high value and frequent transactions under the control and direction of the beneficial owner, VP Binay,” it said.

According to the AMLC report, the subject accounts, especially those of Binay, and joint accounts of Limlingan, Sedillo Portollano and Baloloy showed “multiple large transactions amounting to billions of pesos coinciding with the period of construction of the New Makati Parking Building 11 and Makati Science High School, and the Joint Venture agreement with Boy Scouts.”

“Probable cause exists that the subject bank accounts or investments are related to unlawful activities or money laundering which warrants the forfeiture in favor to the government,” the report said.

The AMLC findings showed: that multiple bank accounts were maintained by the dummies either individually or jointly with several banks; multiple transfers were made from bank accounts in the names of Binay and his dummies to other accounts of the same names or other either within the same bank or to other banks and subsequently withdrawn; the transactions, particularly deposits and placements, were made predominantly in cash; the financial transactions appeared to have no underlying legal or trade obligation, purpose or economic justification; the amounts involved were not commensurate to the financial capacity of the account holders and the financial transactions were conducted during the construction of the parking building and Makati Science High School and during the implementation of the Joint Venture Agreement of the Boy Scout with Alphaland; and many withdrawals and terminations were made from and after the Senate hearings on the alleged overpriced parking building.

“Such acts of disposing assets or funds and withdrawals since the Senate inquiry started would indicate an intention to hide or conceal proceeds of the unlawful activities in the construction of the two Makati buildings and the questionable transactions involving the Boy Scouts of the Philippines,” the report said.

PARADISE LOST A mansion and an elaborate English-style garden inside what has been called “Hacienda Binay” in Rosario, Batangas province, allegedly owned by Vice President Jejomar Binay are now the subject of forfeiture proceedings by the government. INQUIRER PHOTOS

The report also concluded that respondents whose money was frozen did not bother to get their money back.

“Tellingly, the named respondents did not seek the lifting of the effects of the Court of Appeal’s freeze order; this indicates that the accounts frozen did not belong to them, but to another person, VP Binay, the principal.”

Binay maintained multiple accounts either singly or jointly with Limlingan and Baloloy and hundreds of transactions were recorded in these accounts in various banks from 2007-2014.

“The pattern of transactions in these accounts established Binay’s clear links to the mentioned dummies,” the report said.

The AMLC resolved that its secretariat should file in court through the Office of the Solicitor General a petition for forfeiture order.

The report said the AMLC investigation was based on a referral from the Office of the Ombudsman and the Senate blue ribbon subcommittee hearing. With a report from Christine O. Avendaño