Binay vows to set up agricultural bank under his admin

In his campaign rally at the public market here, Binay also vowed to grant land titles to those living in reservation areas if he wins as president.

He said during his Cabinet stint as the administration’s shelter czar, he was able to give land titles to people living at reservation areas in Bantayan island, Cebu.

Binay said he was told by La Trinidad mayor Edna Tabanda of the problems of residents living in reservation areas in obtaining land titles.

Binay said the inalienable lands resided by Benguet residents should be converted to residential areas.

“Walang logic. Okay, it is inalienable at the time. It is a reservation. Pero times have changed. ‘Yung mga lugar na naging residential na, come on, let’s live with realities,” Binay said.

“Ang mga nakita sa reservation, immediately, after I assume office. I’ll make sure to it there’s a conversion of property from from inalienable to alienable,” he added.

Binay also promised to farmers that he would modernize the farming sector by scrapping the irrigation fees and building an agricultural bank.

Binay also vowed to scrap the irrigation fee, saying it is only in the Philippines where farmers are forced to pay such fees.

He said he would also improve the Comprehensive Agrarian Reform Program by assisting farmers beneficiaries under the program with subsistence fees to prevent them from selling their allotted agricultural lands.

Binay attended the Philippine Military Academy graduation rites in the morning. He later held a motorcade in the afternoon around Baguio city and La Trinidad.

Trailing behind his convoy was a truck of Igorots who sounded their gongs.

Binay’s Ibanag roots hail from his mother who was from Cabagan, Isabela. 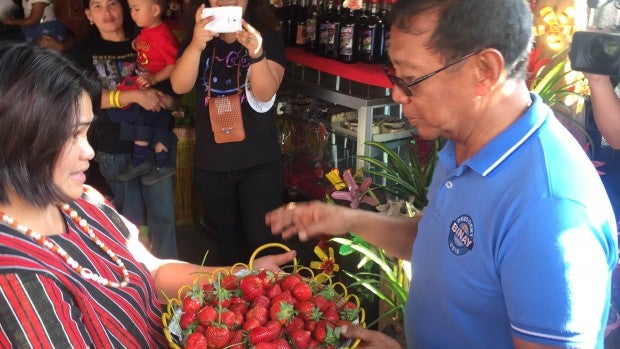 Jejomar Binay receives a basket of strawberries from a trade fair after his campaign rally at the public market in La Trinidad, Benguet. MARC JAYSON CAYABYAB/INQUIRER.net