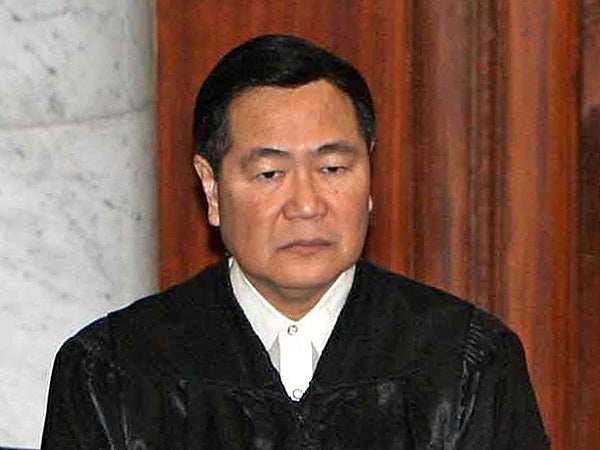 ALLOWING Senator Grace Poe to run for President despite questions on her citizenship is a making a mockery of the national elections, Senior Associate Justice Antonio Carpio said in his dissenting opinion.

Carpio said the question on whether Poe is a natural-born citizen or not was not resolved by the majority.

He said voting on the citizenship was 7-5-3.

The two other magistrates – Associate Justices Diosdado Peralta and Benjamin Caguioa – joined the separate dissenting opinion of Associate Justice Mariano Del Castillo that the high court should not rule on the citizenship issue on this case.

They held that the Comelec committed grave abuse of discretion since Poe did not make deliberate misrepresentation on her 10-year residency status, but there is no need for the SC to determine the eligibility of Poe on the citizenship requirement under the Constitution.

Under Rule 12, Section 1 of the SC Internal Rules requires that all decisions and actions in court cases “shall be made up upon the concurrence of the majority of the Members of the Court who actually took part in the deliberation on the issues or issues    involved and voted on them.”

For a case where all 15 justices voted, at least eight votes are needed to achieve a majority ruling.

“What is clear and undeniable is that there is no majority of this Court that holds that petitioner Mary Grace Natividad Poe Llamanzares is a natural-born Filipino citizen. This ruling of the majority will lead to absurd   results, making a mockery of our national elections by allowing a presidential candidate with uncertain citizenship status to be potentially elected to the Office of the President, an office expressly reserved by the Constitution exclusively for natural-born Filipino citizens,” Carpio said.

He explained that the 9-6 voting was on the question of whether to grant Poe’s petition to overturn the Commission on Elections (Comelec) disqualification order for material representation on both her citizenship and residency.

Carpio added that the majority ruling provided an “anomalous situation” beyond the intent of the framers of the Constitution.

“Any person, who is not a natural-born Filipino citizen, running for President is obviously a nuisance candidate under Section 69 of the Omnibus Election Code,” Carpio said.

Poe was found abandoned at a church in Jaro, Iloilo. Her biological parents were unknown. Those questioning her citizenship said she cannot be considered natural born because there is always that probability that she was born to foreign parents.

Carpio insisted that Poe should be the one to prove her citizenship.

Also, the senior justice added that the country is not bound by international laws on foundlings.

Manuelito Luna, lawyer of former Sen. Francisco “Kit” Tatad, one of the four disqualification petitioners against Poe, has taken cue from Carpio’s dissent in their plan to appeal the ruling.

“Only seven justices or less than the majority of the SC voted to declare Poe presumptively natural-born. It binds no one; it cannot become part of the law of the land or jurisprudence,” he said in a statement.

Luna questioned the explanation of Sereno in her concurring opinion that the basis in counting the majority should only be 12 and not 15 since the three who voted not to rule on the citizenship issue should not be counted.

“The seven justices practically re-wrote the Constitution through a judicial opinion resulting in the impermissible discrimination of half-bloods, those whose mothers are Filipinos and covered by the 1935 Constitution,” he argued.