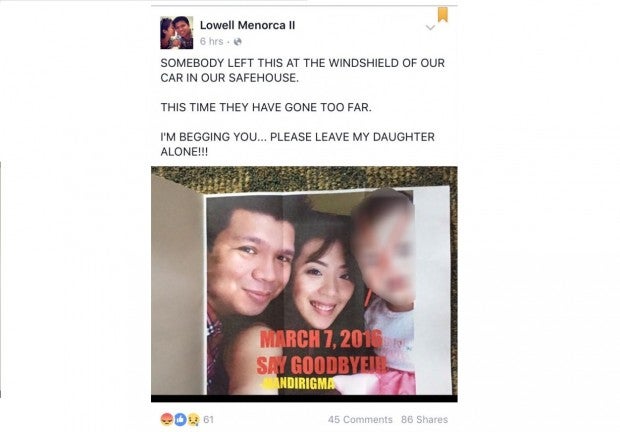 THE COURT of Appeals on Monday asked the Bureau of Immigration (BI) and Philippine National Police to locate within five days expelled Iglesia ni Cristo (INC) member Lowell Menorca II after he failed to appear in the hearing for the amparo cases he filed against the sect’s council members.

Menorca’s lawyer Trixie Angeles told reporters that she manifested before the appellate court’s Seventh Division that she and counsel Ahmed Paglinawan had lost contact with Menorca, adding that she could not confirm yet the BI’s report that her client and his family had left for Vietnam.

Smarting from allegations online that it had a hand in Menorca’s supposed “disappearance,” INC called Menorca a “fugitive from justice.” (See story on this page.)

Angeles said Menorca called her and Paglinawan, allegedly from Ninoy Aquino International Airport, around 7 p.m. on Sunday night, informing them that he had received a death threat.

The threat came in the form of a picture of his family with a date and the face of his daughter marked with an ‘X.’ Printed on the picture was the message, “March 7, 2016 Say Goodbye!!! -Mandirigma.”

The picture was posted on Menorca’s official Facebook page around 5 a.m., with the words, “Somebody left this at the windshield of our car in our safe house. This time they have gone too far. I’m begging you…. Please leave my daughter alone!!!” The page is maintained by Menorca and several unidentified administrators.

“It scared him so much that they proceeded to the airport to secure his family,” Angeles said.

She said Menorca also informed her that there was a hold-departure order (HDO) against him and that he was also on the BI watch list.

“He was held by immigration officials supposedly to be turned over to the PNP and brought to Camp Crame because of an outstanding warrant. He called us later on around 8 p.m. and told us that he was allowed to leave to which we expressed our reservations because if there is an HDO, it would not be possible [for him to leave], Angeles said.

“Nevertheless, he promised to call us no matter how things turn out and he has not been reachable ever since,” she added.

According to Reyes, no HDO has been issued by any court against Menorca.

Menorca earlier accused members of the INC governing council of having something to do with his abduction in Bulan, Sorsogon province, and illegal detention in July last year.

His brother and sister-in-law filed habeas corpus and writ of amparo petitions in the Supreme Court, which ordered the Court of Appeals to conduct hearings.

In a press conference held shortly after he surfaced in October last year, Menorca said INC leaders had suspected him of being the mysterious blogger Antonio Ebangelista who had been writing about alleged corruption and other anomalies in the sect.

Menorca is also the subject of a string of libel cases all over the country filed by members of a group he accused of being used by INC for illegal activities.

At Monday’s hearing, Angeles said she would file a manifestation to ask for assistance to determine Menorca’s whereabouts—whether he has been arrested and the circumstances surrounding his condition.

Pointing to the early morning post on Menorca’s Facebook page, INC lawyers led by Patricia Ann Prodigalidad cast doubt on Angeles’ claim that she was not able to reestablish communication with Menorca after 8 p.m. Sunday.

“I am expressing suspicion as to the authenticity of this claim,” Prodigalidad said.

The court reset the hearings to March 21 and 28 after giving an order to the PNP and the BI to find Menorca within five days.