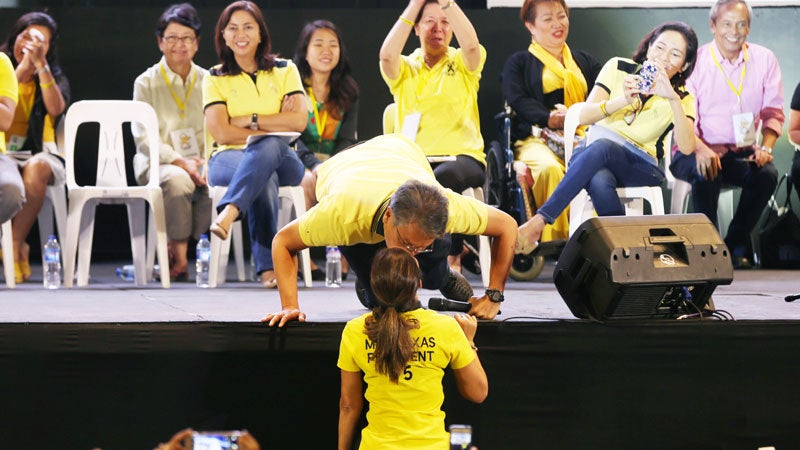 A BUSS FOR MAR Presidential candidate Mar Roxas gets a kiss from his wife, broadcaster Korina Sanchez, during a gathering at Makati Coliseum onMonday to celebrateWomen’sMonth. Sharing the stage is Roxas’ running mate Leni Robredo (left). MARIANNE BERMUDEZ

MIDWAY through his speech, an exultant Mar Roxas hollered to the crowd inside the 3,000-seat Makati Coliseum: “It cannot be denied: Makati is so yellow now (dilaw na dilaw na)!”

As though spoiling for a fight, the Liberal Party (LP) standard-bearer swaggered into Vice President Jejomar Binay’s stomping grounds on Monday to try to stake a claim on the city ruled by the latter’s family for three decades.

And for a few hours, at least, it seemed his efforts were paying off.

Roxas, with running mate Leni Robredo and three senatorial candidates on the LP lineup, was greeted by an army of supporters in yellow shirts in the same coliseum where Binay launched his United Nationalist Alliance (UNA) party in July last year.

The rally was supposed to be a nonpartisan event in observance of National Women’s Month. But Roxas could not resist taking potshots at his political nemesis Binay, who defeated him in the vice presidential race in the 2010 elections by more than 700,000 votes.

Although he did not identify the Vice President by name, Roxas alluded to the Binay family’s 30-year hold on politics in the country’s financial capital.

“Thirty years of serving … what did we get out of it?” he said, drawing thunderous applause.

“But I am sure of one thing. In those 30 years, if public service was done right, cleanly and without stealing your money, Makati would have gone a much farther way than this,” he said to another salvo of cheers.

Roxas made it clear he was squarely behind the LP’s mayoral candidate in the city: acting Mayor Romulo “Kid” Peña, who took over after Binay’s son, Junjun Binay, was dismissed from the service in October last year.

The Ombudsman has ordered the younger Binay’s dismissal for “grave misconduct and dishonesty” stemming from irregularities in the contracting and construction of a Makati parking building.

Binay’s daughter, outgoing Makati Rep. Abigail Binay, is running to take back the mayoralty post, while her husband is seeking the congressional seat she would leave vacant.

In her speech, Robredo appealed to the Makati crowd to take a closer look at the candidates wooing them for their votes.

“During the elections, everyone will come to you. Everything you want to hear the politicians will say. It’s easy to make promises or lay out a nice platform … but don’t miss the chance to do the right thing,” said the Camarines Sur congresswoman.

Security was tight with police and traffic enforcers stationed at every street corner or block around Makati Coliseum.

Laura Ranara, 60, of Barangay Singkamas, said it was only “natural” she would vote for Roxas and Robredo in May.

“What can we get out of Binay? If Binay won, he would just get rich again from Makati,” she said. “We don’t want Binay here anymore,” she said.

But elsewhere, the influence of the Binays remains strong in the city of 400,000 voters.

About 50 meters away from the coliseum, a group of people was idly milling around in an alley, blocked by a police barricade from entering the coliseum.