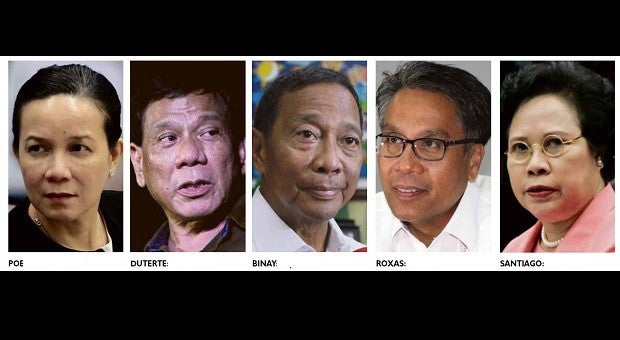 Duterte gained 4 points which landed him in second place with 24 percent of voter preference in the latest survey of The Standard conducted from Feb. 24 to March 1. He passed Binay who had 23 percent (up 1 percent) and moved closer to Poe whose voter preference fell 3 points to 26 compared to January figures.

The latest results showed the race for the presidency becoming “tighter,” according to Junie Laylo, The Standard’s resident pollster.

With the national margin of error at + or – 1.8 percent, Binay, Poe and Duterte are “statistically-tied” in first place, the Standard reported.

The survey came on the heels of the first presidential debate which was conducted at Cagayan de Oro City last Feb. 21 and was presented by GMA and the Philippine Daily Inquirer.

Across major geographic areas, Poe and Binay were tied in the National Capital Region, North/Central Luzon and South Luzon/Bicol with a +/- 4 percent margin of error.

Roxas continues to secure his hold in the Visayas, except in Eastern Visayas where Binay led. Meanwhile, Duterte led in all regions in Mindanao.

Poe continues to lead in urban areas with 27 percent, an eight-point drop from the score she got last January. On the other hand, Duterte is ahead in rural areas with 25 percent.

The survey had 3,000 respondents from 79 provinces and 17 cities of Metro Manila. All respondents said they were registered voters sure of voting in the May 9 elections. The national margin of error was placed at + or – 1.8 percent.