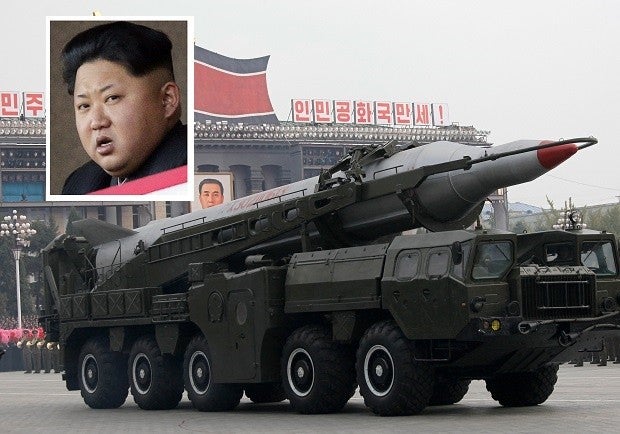 In this Oct. 10, 2010 file photo, North Korea missiles on trucks make its way during a massive military parade to mark the 65th anniversary of the communist nation’s ruling Workers’ Party in Pyongyang, North Korea. Nuclear-armed North Korea has hundreds of ballistic missiles that can target its neighbors in Northeast Asia. The rogue state headed by Kim Jong Un (inset) has threatened ‘indiscriminate’ nuclear strikes against South Korea and the US if the two allies push through with joint military drills on Monday, March 7, 2016. AP

SEOUL, South Korea — North Korea threatened “indiscriminate” nuclear strikes against South Korea and the US mainland if the two allies push ahead with joint military drills scheduled to begin Monday.

The threat to carry out what it described as a “pre-emptive nuclear strike of justice” was made in a statement by the North’s powerful National Defense Commission, citing the Supreme Command of the Korean People’s Army (KPA).

It came just days after leader Kim Jong-Un ordered the country’s nuclear arsenal to be placed on standby for use “at any moment,” in response to tough new UN sanctions imposed over the North’s fourth nuclear test in January and last month’s long-range rocket launch.

Pyongyang has issued dire warnings of nuclear attack in the past, usually during periods of elevated military tensions of the Korean peninsula.

While the North is known to have a small stockpile of nuclear warheads, experts are divided about its ability to mount them on a working missile delivery system.

“The indiscriminate nuclear strike… will clearly show those keen on aggression and war, the military mettle of (North Korea),” said the statement published by the North’s official KCNA news agency.

Any strike would not just target operational theatres on the Korean peninsula, but also US bases on the mainland and in the rest of the Asia-Pacific region.

“If we push the buttons to annihilate the enemies even right now, all bases of provocations will be reduced to seas in flames and ashes in a moment,” it added.

The annual exercises slated to begin Monday — called “Foal Eagle” and “Key Resolve” last for weeks and involve tens of thousands of US and South Korean troops.

Pyongyang has long condemned the drills as provocative rehearsals for invasion, while Seoul and Washington insist they are purely defensive in nature.