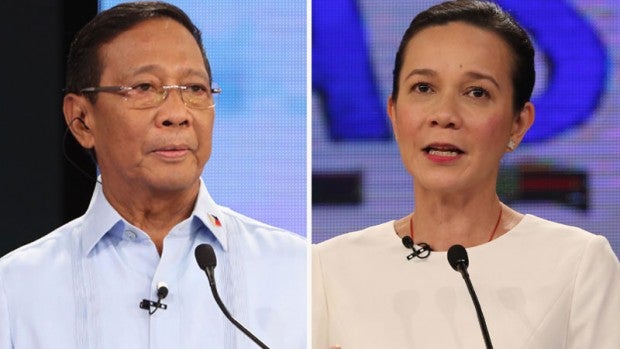 Four weeks into the campaign for Malacañang, Sen. Grace Poe and Vice President Jejomar Binay are in a standoff for the lead, according to the results of the latest Pulse Asia voter preference poll for the May 9 presidential election.

The results of the poll released on Friday showed that Poe is favored by 26 percent of 1,800 registered-voter respondents, while Binay has a voter support of 25 percent.

Sen. Miriam Defensor-Santiago remains at the rear, with a voter support of 3 percent.

The standoff with Binay will not last long, according to Poe’s camp.

With the recent endorsement of the Nationalist People’s Coalition (NPC), the country’s second-largest political party, Poe will pull away in the next poll, Valenzuela City Mayor Rex Gatchalian, spokesperson for Poe’s campaign, said Poe.

He said the NPC’s more than 4,000 members across the country would serve as Poe’s “surrogates” in bringing her message to the voters.

“Despite all the left-handed attacks against the person of Senator Poe, the Filipino voters continue to stand behind her,” Gatchalian said.

Poe, who topped the 2013 senatorial election with more than 20 million votes, is fighting in the Supreme Court two Commission on Elections decisions disqualifying her from the presidential election because she is not a natural-born Filipino and she does not meet the 10-year residency requirement for candidates.

The court is expected to hand down a ruling in the next few days.

‘History will repeat itself’

Binay does not think Poe will run all the way to Malacañang. Instead, he sees a repeat of his come-from-behind victory in the 2010 election.

“Historically, that’s what happened [in 2010]. I moved up in the last two months, especially in the last two weeks. I think history [will repeat itself],” Binay told reporters in Bulacan province, where he was campaigning on Friday.

Roxas was happy with the slight improvement in his poll standing.

“We are grateful, because the reason why our numbers are this close is the people’s support for [the straight path],” Roxas said, referring to President Aquino’s reform program.

“They are the ones who wield the real power [to elect their leaders]. I believe that they will not back down from fraudsters, thieves and those who don’t know where they will take us,” he told reporters on Olango Island, Cebu province, where he was campaigning yesterday with his running mate, Camarines Sur Rep. Leni Robredo.

For Malacañang, the poll results mean the “race is tightening” for Roxas.

“The posturing is wearing thin as reality is catching up with those increasingly unable to withstand scrutiny,” presidential spokesperson Edwin Lacierda said.

“As the public’s attention and concentration increases, the breakthrough of the true candidates of reform is imminent,” he said, referring to Roxas and Robredo.

The camp of Duterte, the pugnacious mayor of Davao City, said the results of the Pulse Asia poll did not reflect the real sentiments of the voters.

“The elections are still a good two months away and we have plenty of time to move up,” Laviña said.

Santiago said she would “never surrender” despite straggling in the polls.

“Even as we gather in this hot place, notwithstanding the inconvenience, I will never stop. I will never quit. I will never surrender,” Santiago told hundreds of cheering students in the covered court of Our Lady of Fatima University in Valenzuela City on Friday.

Santiago did not make it clear, however, whether she was commenting on the results of the latest Pulse Asia poll.

She said it was her moral duty to run for President.

“You ask me how we can change our country. It’s [by changing] ourselves. It’s such a bad world but instead you say, ‘God, change this world and begin with me,” she said.

Santiago is battling lung cancer, though she says she is in remission.

Pulse Asia conducted the nationwide, noncommissioned poll from Feb. 15 to 20, a week after the campaign started on Feb. 9.

Poe’s latest score is 4 points down from 30 percent in January, when she was the front-runner.

Preference for Binay as President moved by 2 points from 23 percent in January, while Roxas and Duterte—who were tied with 20 percent each last month—improved in standing  by a point.

Santiago’s score was lower by a point from 4 percent in January.

“Given the margin of error, Senator Poe and the Vice President are statistically tied. Meanwhile, Binay is also in a statistical tie with Duterte and Roxas,” said Ronald Holmes, Pulse Asia president.

“The campaign had just started when we conducted the survey,” he said. “It has led so far to the retention of voter preference levels for the candidates.”

Holmes noted that no candidate registered significant increases or declines.

“It’s a pretty tight race,” he said, adding that Poe’s 7-point decline among Class D voters is perhaps the only movement worth noting within areas and socioeconomic classes.

‘Too close to call’

Edmund Tayao, political science professor at the University of Santo Tomas, also thinks the race is “too close to call.”

“Honestly, this is an election where we can’t really say when we can expect a pattern,” he said. “It seems that all the campaigns still lack something, and voters are still waiting for it before they make up their minds. The usual propaganda is really no longer enough.”

With the poll conducted before the first presidential debate in Cagayan de Oro City on Feb. 21, Tayao said it would have been interesting to see the debate’s effects on the numbers.

“Several points raised during the debate would have played right into the public’s discussion,” he said.

Tayao said it was time for the candidates to be more forthcoming about their specific positions on issues.

“When candidates offer more specific pronouncements, say on issues like tax restructuring or the West Philippine Sea, they can give the voters more to chew on, so to speak,” he said.

Support for Poe was virtually unmoved in the Visayas (24 percent from 26 percent) and Mindanao (15 percent from 16 percent). In Metro Manila, it went from 33 percent to 23 percent, while it was at 33 percent in the rest of Luzon (from 39 percent).

By class, Poe retained her score among Class ABC (25 percent), while among Class E it moved from 26 percent to 28 percent. Pulse Asia noted as significant Poe’s 7-point dip among Class D (25 percent from 32 percent).

Duterte’s ratings were statistically unchanged in the rest of Luzon (10 percent from 8 percent), the Visayas (19 percent from 15 percent) and Mindanao (45 percent from 48 percent). In Metro Manila, it was at 23 percent (from 16 percent).

Preference for Duterte was unchanged among Class ABC (24 percent), Class D (22 percent from 21 percent) and Class E (18 percent from 15 percent).

Among the issues that dominated the headlines at the time of the survey were the hearings in the Supreme Court on the disqualification cases against Poe, the adjournment of Congress without passing the proposed Bangsamoro Basic Law and the freedom of information bill. With reports from Leila B. Salaverria, Tarra Quismundo, Nancy C. Carvajal, Nikko Dizon and Dona Z. Pazzibugan in Manila; Marlon Ramos in Cebu; and Nico Alconaba, Inquirer Mindanao