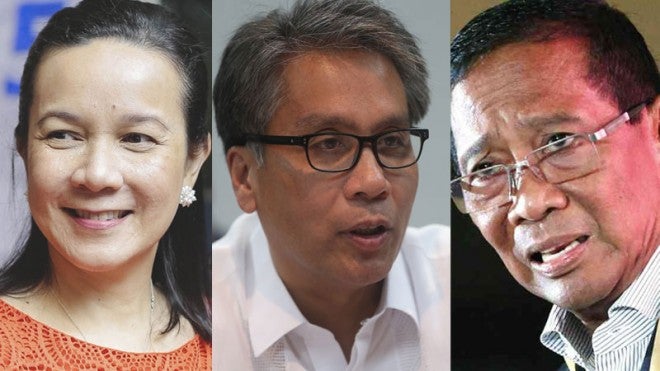 Roxas predicted that Binay would get the “biggest chunk” of votes if the Supreme Court would decide to disqualify her as a presidential candidate from the national elections for her questionable citizenship and residency.

“I might get a chunk or portion of the votes for Poe, but the biggest chunk will go to him,” Roxas told select reporters.

READ: Poe: It will be very convenient for Binay if I’ll be disqualified

Without directly saying Binay is among those working for Poe’s disqualification, Roxas said, “It’s in his interest.”

But Roxas said his basis for saying Binay would get Poe’s votes was “a (result) of our study and examination of the survey ratings.”

The former Interior secretary is here in Cebu to campaign in the province that delivered the most number of votes for Roxas when he ran as vice president in the 2010 national elections.

Poe accused Roxas and Binay of having a hand in her disqualification. Both presidential candidates denied the allegation.

Roxas, who had previously wooed Poe to be his running mate, pointed out that it was Binay’s camp who first came out in the media to claim that Poe fell short of the 10-year residency requirement to vie for the presidency. IDL

Read Next
No surrender for Miriam despite poor survey ratings
EDITORS' PICK
Smart celebrates all kinds of ‘#SimplyLove’ for Pride Month
‘Work from beach’ suits Pinoy digital nomads
SANTIS Delicatessen: The road to survival is sweet and savory
SWS: Over 12M Filipinos still jobless as of May 2021
Smart brings KCON:TACT especially 4U to subscribers from June 19 to 27
Another Filipino falls victim to hate attack in California
MOST READ
Gordon eyes VP running mate for 2022 polls
Gilas Pilipinas routs Indonesia anew, stays unbeaten in Fiba Asia Cup qualifiers
Landmark tale of corruption
William Martinez sometimes feels his kids ‘don’t remember’ him anymore
Don't miss out on the latest news and information.