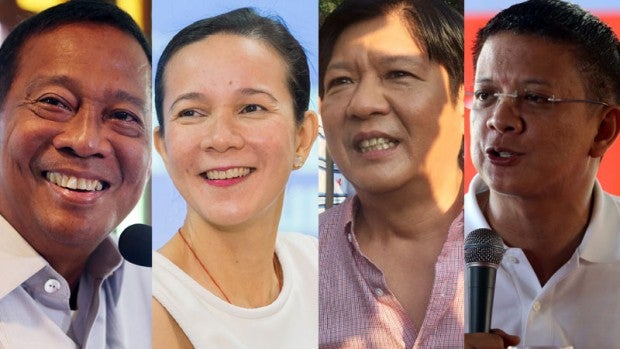 Barely two months before the 2016 national elections, four presidential aspirants are in a dead heat for the lead according to the latest Pulse Asia survey.

Senator Grace Poe and Vice President Jejomar Binay shared the top spot in the presidential preference poll, with the former getting the nod of 26 percent, while the latter was chosen by 25 percent of the 1,800 respondents.

They were closely followed by Davao City Mayor Rodrigo Duterte and former Interior secretary Manuel “Mar” Roxas, who both got 21 percent. Senator Miriam Defensor-Santiago was in last place with three percent. Four percent of the respondents, meanwhile, were still undecided or refused to divulge their choice.

The four leading candidates scored high in one of the each four regions where the survey took place. Poe led in Balanced Luzon with 33 percent. Binay, a former mayor of Makati City, lorded it over in the National Capital Region with 33 percent. Roxas, whose bailiwick is Capiz City, was ahead in Visayas with 35 percent, while Duterte continued his dominance in Mindanao with 45 percent.

The poll, which was conducted from February 15-20, asked the respondents face-to-face, “Of the people on this list, whom would you vote for as President of the Philippines if the 2016 elections were held today and they were candidates?” The nationwide survey had a ±2 margin of error and 95 percent confidence level.

The survey was conducted after the official start of the campaign period but before the first presidential debate in Cagayan de Oro City on February 21.

Escudero was chosen by 29 percent of the respondents, while Marcos was picked by 26 percent. In third place was Camarines Sur representative Leni Robredo with 19 percent.

Senator Alan Peter Cayetano was in fourth place with 12 percent. He was followed by Senator Antonio Trillanes with six percent. Senator Gringo Honasan lagged behind with four percent. Three percent, meanwhile, were still undecided or refused to identify their preference.