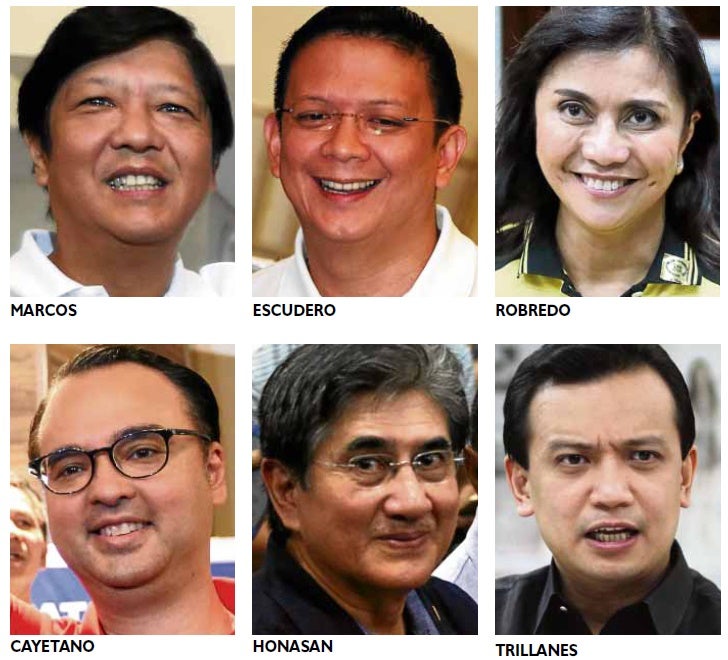 THE NAMESAKE son of the late dictator Ferdinand Marcos is counting on millennials and remnants of his father’s loyalists in his attempt to take back his family to within a heartbeat of Malacañang 30 years after they were kicked out in a popular uprising.

Sen. Ferdinand “Bongbong” Marcos has finally caught up with Sen. Francis Escudero in the latest popularity survey conducted by the Social Weather Stations (SWS), released Monday, sharing the top spot in the vice presidential race in the May 9 elections, each getting the nod of 26 percent of the respondents.

Analysts said the dictator’s legacy and possible ascent to power of his son were emerging as among this election’s top campaign issues.

“The bulk of the electorate, particularly the millennials, will likely vote for him because of his competence, ample executive and legislative experience as well as youthful vigor and incisive posture in addressing the challenges facing the nation,” said National Unity Party secretary general Reginald Velasco.

Velasco said another key demographic supporting Marcos was his father’s loyalists and those born and raised during the Marcos years who believe the 1970s were the “golden years of the Philippines” in contrast to claims of leftist and human rights groups.

“Bongbong’s victory will hinge on these twin groups that don’t really put much weight on the ‘sins of the past’ committed by the Marcos regime,” Velasco said.

Former Akbayan Rep. Walden Bello agreed that Marcos was a catalyst to unite his father’s forces.

“Hitler and (deposed President) Marcos came to power through democratic elections. But are we exaggerating? I don’t think so. The Marcos revanchists are everywhere, in the agencies, in the armed forces, in the political dynasties. They are now fragmented but a Bongbong presidency would unite them to possibly serve as base for a presidential coup as in 1972,” Bello said.

He called Marcos’ rise in the survey a “disturbing trend,” which had changed the complexion of the 2016 elections as it made the fight for the vice presidency as important as the presidency. 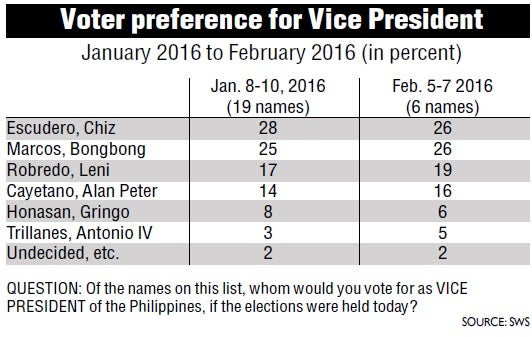 “It would be the height of irony if Marcos would become Vice President on the 30th anniversary of the Edsa Republic. But it would underline the great failure of the Edsa system: the way its promise was strangled by traditional elite politics,” Bello said.

In the latest SWS survey, Marcos, with 26 percent, gained 1 point in the Feb. 5-7 survey from last month, while Escudero’s rating fell 2 points from 28 percent in January to 26 percent.

Following them were Camarines Sur Rep. Leni Robredo and Sen. Alan Peter Cayetano, who both gained 2 points between January and February.

Sen. Gringo Honasan had 6 percent, down from 8 percent, and Sen. Antonio Trillanes IV had 5 percent, up from 3 percent.

In a brief statement, Marcos said: “Every survey result keeps us inspired to work harder in the campaign. But, as I have always said, the real survey will be on May 9, 2016, and that has been our focus as we continue to persevere in bringing our platform of unity to every part of the country.”

Escudero remained upbeat. “It only means we have to work harder, and given our limited resources, find innovative yet not so expensive ways to reach out to more people with our message of hope, honesty and progress for our country,” he said in a text message.

Robredo expressed elation: “We’re right on target. After all, I have only been going around for three months while my rivals have been doing it for three years,” she said in a statement.

Cayetano, who was campaigning in Tagoloan, Misamis Oriental province, said: “The election is still far away. What’s important is that we are slowly but surely climbing up.”

Kabataan Rep. Terry Ridon explained why people who were born after Marcos’ ouster would fall for Bongbong. 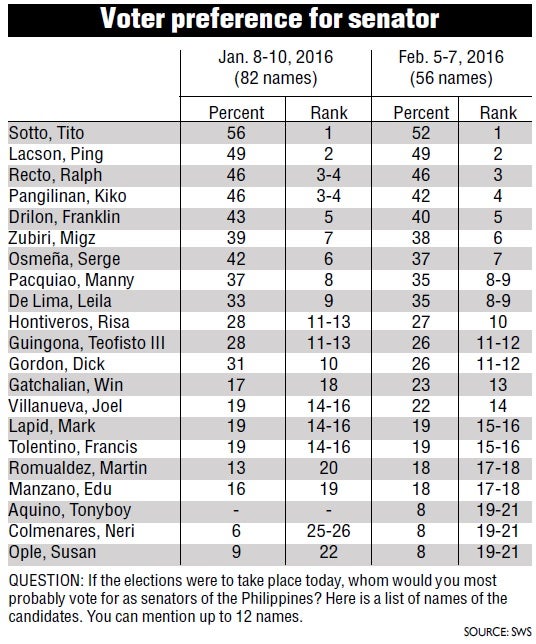 “It is easy for millennials to pine for a time they never experienced but one only needs to listen to the truth-telling of tens of thousands of victims of the dictatorship to realize that martial law was no walk in the park. In fact, if the millennials were alive during the dictatorship, they would be the first to call out the Marcoses for their opulence and excesses, similar to what social media does now against the high and mighty among us,” Ridon said.

ACT Teachers Rep. Antonio Tinio said the revival of the political fortunes of the Marcos dynasty was the price the present generation must pay for the failure of post-Edsa administrations to hold the Marcoses accountable for wholesale plunder and human rights violations.

“I personally don’t believe he’ll win. The challenge is to use the campaign period as an opportunity to educate the electorate and the public on the true legacy of the Marcos dictatorship,” said Tinio.

Bayan Muna Rep. Carlos Zarate said it would be a sad day for the country if the Marcoses would return to power without having atoned and accounted for “their sins, bloody excesses and plunder of the government coffers during the reign of the dictatorship.” With reports from Jeannette I. Andrade and Marlon Ramos, in Manila, and Jigger J. Jerusalem, Inquirer Mindanao