In field on edge of Greece, refugees’ desperation grows 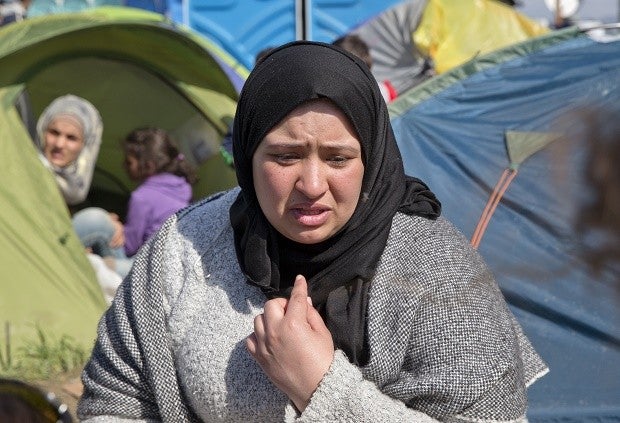 Insaf Haddad, 25 years-old, speaks during an interview with the Associated Press at a camp in Idomeni, northern Greece, on the border with Macedonia, Thursday, March 3, 2016. Insaf Haddad said her family decided to head for Germany to rebuild their lives but they have been living in a tent near the railway tracks for two days and many others have been there for at least two weeks, and they are beginning to despair. The fields on the outskirts of the small Greek village of Idomeni have become the flashpoint in Europe’s massive refugee crisis, the size of which the continent has not seen since World War II. AP

IDOMENI, Greece — By the hundreds they come, trudging along the sides of highways and across fields, dragging tired toddlers and pushing the elderly and injured in wheelchairs — a seemingly endless stream of humanity heading north for a better life.

Only their path has been blocked by border restrictions set up by European leaders balking at the sheer magnitude of the problem they face: How to care for and integrate hundreds of thousands of refugees and migrants knocking at their door.

The fields on the outskirts of this Greek border town have become the flashpoint in Europe’s massive refugee crisis, the size of which the continent has not seen since World War II.

More than a million people, mostly Syrians fleeing a vicious five-year civil war, fled to the European Union in 2015. The first two months of this year have seen no letup despite the winter and its rough seas, and governments across the continent are bracing for even more with improving weather in the spring.

At the border, Macedonian authorities have set up coils of razor wire, leaving a narrow passage through which they control the migration flow. Over the past few weeks, the controls have grown increasingly stringent, and now only a trickle are allowed through.

The first restrictions were applied late last year to those deemed to be economic migrants fleeing poverty in their homelands. Only Syrians, Iraqis and Afghans were permitted to pass. Then last month, Afghans were stopped too. Now, Macedonia says it will only let as many refugees in as Serbia to the north will allow to cross its frontier — sometimes as few as 30 a day. Sometimes none.

READ: EU to give emergency aid to help Greece cope with migrants

It didn’t take more than a day or two for the refugee camp on the Greek side of the border, with a capacity of about 2,000, to overflow. Now, hundreds of tents are pitched around it, spilling out across a railway line into the nearby fields. An estimated 10,000 people are camped here, hoping against hope that the border will open and they will be let through.

For some, arriving after days or weeks of a journey that nearly cost them their lives as they fled across the sea to Greek islands from Turkey, the sight is almost unbearable: They fear this field is where their dreams have come to die.

“I would love to have hope, but after you see all of this — hope can’t stay in places like this,” said Hala Haddad, a 19-year-old English literature student from Syria’s now pulverized city of Homs. “The only thing that’s here is desperation and misery.”

Haddad fled Syria along with her sister Insaf, four brothers and their parents two years ago, with the family trying to make a life in neighboring Jordan. They hoped they would be away only a month or two, and wanted to stay close to home so they could easily go back. But the war only intensified, and the cost of college there was soon prohibitive. They decided to head for Germany to rebuild their lives.

“We ran from no life, thinking we might have one, and now we’re stuck in no life again,” Haddad said.

The perilous sea journey, in a flimsy rubber boat that started sinking from the sheer weight of its overloaded human cargo, was supposed to be the worst of it. A Greek coast guard vessel plucked the panicked passengers from the sea just in time. Haddad was trampled in the melee and received a blow on the side of her head and says she can no longer hear from her left ear.

“I thought that it will be an easy trip after the sea. The sea was a terrifying trip, a nightmare actually. I thought that I will lose a member of my family there,” said 25-year-old Insaf Haddad. “Then when we got to Greece, I thought that the trip would go easily. But the reality hit us that the Macedonian borders are closed. We cannot do anything about this.”

The family has been living in a tent near the railway tracks for two days. They have heard of others who have been there for two weeks or more, and are beginning to despair. The hardship has already proven too much for their youngest brother, 10-year-old Mahmoud, who fell ill with a high fever, and has been coughing and vomiting and can barely stand, the sisters said.

“I am not losing hope, but when I see people who have stayed here for 16 days or 12 days, it’s not much of a hope for me, or for anyone to hear this,” said Hala Haddad. “Maybe one day we will leave here, and maybe one day the humanity of their hearts will move a little bit,” she said of European leaders who are keeping the borders closed.

As daylight faded, small camp fires lit up among the tents, fed by twigs and branches cut from the few remaining trees. Young men and women dragged branches and planks of wood along the narrow country road to use as firewood. Children huddled around the small fires to ward off the night cold.

“I’m not saying only my story. If you take a look at these people, you’ll see my story in everyone,” Hala Haddad said. “Everyone thought they were coming to their dream. But actually we found out we are coming to our nightmare.”