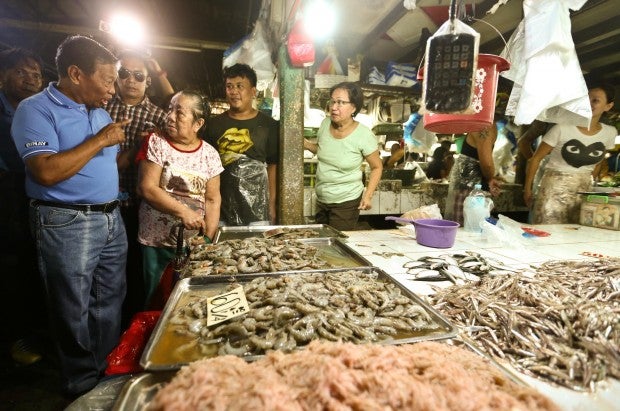 VICE President Jejomar Binay on Saturday made the rounds of public markets close to his political archrival’s turf, saying in so many words that the title “Palengke King” belongs to him.

The United Nationalist Alliance (UNA) standard-bearer was in his element as he visited public markets in Quezon City, scouring the aisles from the fish and meat stalls to the dry goods kiosks to be in the company of the constituency that largely propelled his 2010 victory over the Liberal Party’s Mar Roxas.

“When it comes to the masses, they can’t beat me,” said Binay, as greeters excitedly lined the aisles to see him and shake his hand on his first stop at Mega Q-Mart, a few blocks from Farmers’ Market in  Araneta Center, the Roxas-owned commercial enclave.

“I have long been a palengke  boy. I eat in public markets in Makati City,” said the former Makati mayor when teased that he appeared to be the day’s Palengke King.

In a jolly weekend mood, Binay shook hands with fish sellers and took photos with meat vendors in their blood-smeared aprons. He kissed children and stopped to chat with the enthusiastic ones who approached him.

He gave special attention to senior citizens, most of the time asking for their age. “I am 73,” he told them. He reserved the giveaway

T-shirts for this elderly lot, and bade them goodbye with an “I love you!”

At one turn, blue-clad Binay chanced upon a woman wearing a yellow campaign shirt from the rival Liberal Party.

The Vice President asked her if he would vote for him instead. The woman obliged and said, “Of course.” He then raised her hand campaign rally style.

Binay arrived to an even rowdier welcome at the Kamuning public market, where vendors and shoppers chanted his name. Those in the stalls made clanging noises with their meat and fish buckets.

“Is my President already here? Pa-hug naman!,” said 65-year-old vegetable vendor Gloria Odulio. She got her wish and returned for more at the far end of the market to get a photo with Binay.

The longtime politician agreed when asked if campaigning in public markets is a walk in the park.

He said he could bear the smell of the public market and even took a deep breath in the middle of his sentence to drive his point.

“The others can’t even breathe. And once they get out, they even get dizzy … and even use alcohol,” he said, in an apparent dig at the competition.

Binay, who has made his humble beginnings a central theme of his antipoverty campaign, recalled how he grew up doing the market chore for the household.

“When I was living with my uncle (Ponciano), after sweeping the house, I would go to the market wearing my bakya (wooden slippers),” Binay said.

“If you want, I can show you how I haggle. But I no longer did that in the long run because I already had a suki,” he said.

In his Quezon City outing yesterday, Binay also dropped by Barangay Damayang Lagi in Makati City, where he and his party passed through narrow alleys  to greet residents.

One remarked that Binay “was the first presidential candidate and probably the last one” to visit their community, a densely populated area where houses of unfinished concrete were stacked up to four floors high, and thick tangles of cables over pathways blocked the sun.

He has expressed confidence that he would make further headway as Election Day approaches, anticipating that “history is going to be repeated” in May, a  reference to his 2010 vice presidential victory.

Binay  continues to rise in the polls despite  a string of allegations of corruption during his time as Makati mayor, charges that he has repeatedly denied, saying they are part of efforts to derail his presidential ambition.