Palace on Roxas’ poll showing: ‘Slow but sure’ 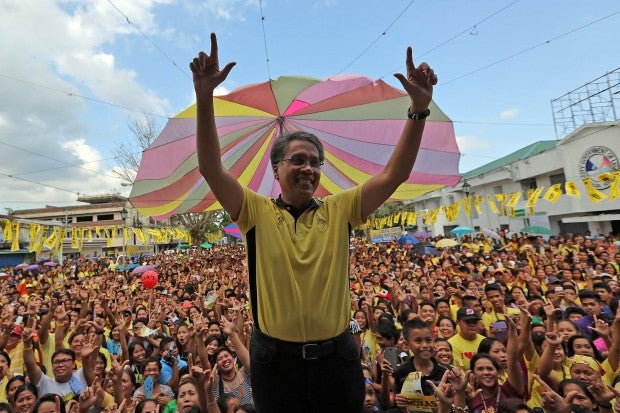 “Slow but sure,” was how Malacañang described the performance of LIberal Party standard-bearer Manuel “Mar” Roxas II in the latest Pulse Asia survey.

“The race has tightened. Dikit dikit po lahat. (It’s neck and neck.) In fact…No one can really be said [is] in a major lead because ang dikit nga nung diperensya nung iba’t ibang mga kandidato (because the differences in ratings between the candidates are very close),” undsecretary Manuel Quezon III said in an interview over state-run DZRB radio on Saturday.

“So this tells us that people are really thinking hard about their choices,” Quezon said.

In the Pulse Asia survey released on Friday, Roxas got a 21 percent voter preference compared to Senator Grace Poe and Vice President Jejomar Binay who shared the top spot in the presidential preference poll, with 26 percent and 25 percent.

Quezon said the poll ratings of Roxas’ rivals’ have been fluctuating while his ratings are steadily going up.

(So, as the campaign goes on, perhaps the debate will prove to be of great weight since it is in the debate where they can see whose answers have substance.

That’s where we can see that our countrymen are thinking and deciding based on which answers have substance and who has answers to the questions we have in mind. Which are only for entertainment or [if] their statements have no backing.) CDG