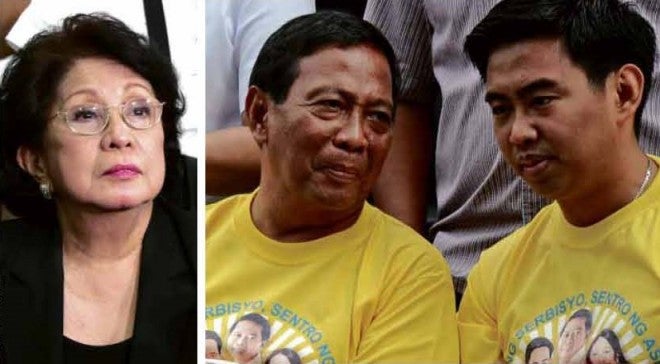 The camp of Vice President Jejomar Binay on Saturday accused the Ombudsman of “exerting pressure” on the Commission on Audit (COA) to release the incomplete audit of the Makati City Hall Building II.

“We have been informed that the Ombudsman has been personally calling up COA officials telling them to transmit to her office its special audit report on Makati Building 2 even if the report does not include the replies or comments of City Hall officials,” United Nationalist Alliance (UNA) president Toby Tiangco said..

Citing COA insiders, Tiangco said Ombudsman Conchita Carpio-Morales “personally called up a ranking COA official prior to her trip abroad demanding that the audit report should be released immediately.”

“In so doing, the Ombudsman wants COA to effectively discard the findings of 11 audits, including one conducted by technical specialists, which concluded there was no overpricing and that the said project complied with COA regulations,” Tiangco said.

He said the COA would violate its own policy that no special audits should be done against candidates running for the May elections.

“It will also be in direct contravention of COA resolution 2015-033 dated Sept 29, 2015 prohibiting the conduct of special audit against candidates of the 2016 elections,” he said.

Tiangco said the actions of Morales “bolster UNA’s claim that Morales has displayed blatant partiality when handling complaints involving the Vice President and members of his family.”

“The Ombudsman represents an administration that has a track record of flouting the law and the Constitution in bringing down its political enemies while ignoring, aiding and abetting unlawful acts of its partymates and allies,” he said.

Tiangco said he is no longer surprised with Morales’ intent on releasing the incomplete report.

He said this would be used to file plunder charges against the Vice President after his term and his son, dismissed Makati Mayor Jejomar Erwin “Junjun” Binay.

(While there is no justification or excuse for behavior like this, it is no longer surprising. When it comes to Vice President Binay and his family, the Ombudsman is always on its toes even if it is wrong and against the law and its own rules.)

Tiangco slammed the Ombudsman for its inaction on the Priority Development Assistance Fund] (PDAF) and Disbursement Acceleration Program (DAP) cases, where some allies of the Aquino administration were implicated.

“The Ombudsman, on the other hand, is sitting on its hand and has failed to even consider taking action against those involved in the DAP scandal which has been declared unlawful and unconstitutional by the Supreme Court,” he said.

“Ang report sa PDAF hanggang ngayon hindi pa tinatapos ng COA dahil maraming miyembro ng LP (Liberal Party) at kaalyado ng administrasyon ang mahahagip (The DAP report has not been finished by the COA because the names of several members of the LP and administration allies would be dragged). In the case of DAP, where the Supreme Court already made a ruling of bad faith on the part of Secretary Abad, there is no COA referral to the Ombudsman,” he added.

He said the actions of the Ombudsman showed that it is part of the attacks against the Vice President.

(These moves by the Ombudsman are no longer a surprise. It is very obvious that they are involved in the defamation of Vice President Binay in order to hinder him from implementing his pro-poor programs that he had already done and will do.)

Binay has earlier filed a P200-million damage suit against Morales and 12 others “for repeatedly spreading allegations of plunder, graft and corruption and other illegal activities against him based on unverified and even fabricated sources, and despite the fact these have not been proven in court.” CDG