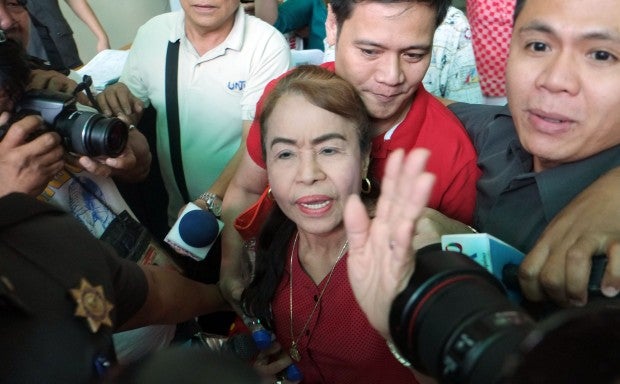 The Pacquiao matriarch has been assessed with P1.6-million tax liability for 2010.

She questioned the assessment with the Court of Tax Appeals (CTA).

READ: Dionisia Pacquiao to testify before CTA on petition vs BIR tax assessment

Section 204 of the National Internal Revenue Code (NIRC) provides for a remedy to taxpayer to settle assessed tax such as compromise settlement or abatement or cancellation of the internal revenue tax liability.

The first step, under the law, is for the taxpayer to file an application for any of the remedies he or she wants to avail before the Revenue District Office (RDO) or the Large Taxpayer Service (LTS), whichever has jurisdiction over the taxpayer, for the initial evaluation.

However, BIR lawyer Katrina Muli, during the hearing, said the Pacquiao matriarch only submitted a letter, however, no formal application for a compromise.

The Pacquiao matriarch went to the Tax Court upon learning of the BIR investigation against her.

The tax assessment was for taxable year 2010 for the amount of around P1.6-million.

During the hearing, the Pacquiao matriarch insisted that she has filed an income tax return (ITR) for 2010.

She said her bookkeeper knows the details as he was the one who prepared and filed the ITR for her.

“The bookkeeper is the one in-charge,” she said in local dialect Bisaya.

Pacquiao’s camp has finished presenting their witnesses. It will be the BIR’s turn to present its witnesses.

The Tax Court gave Pacquiao’s camp 15 days to file their its offer of evidence and 10 days for the BIR to comment.

The next hearing was scheduled on June 8.

Investigation on her possible tax liability started in 2013 at the height of the P2.2-billion tax case against her son.

However, her lawyers Noel Into and Benjamin Cuanan clarified that the case has nothing to do with her son.

Her son and his wife Jinkee also filed a petition for review with the Tax Court on July 2013. RAM