Escudero: In the beginning, Samar group was just me 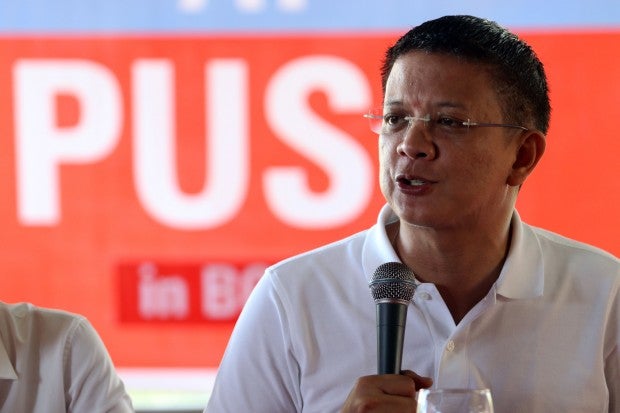 The rivalry between the so-called Balay and Samar factions within President Benigno Aquino III’s inner circle is said to be intensifying with the start of the campaign for Malacañang, but vice presidential candidate Francis “Chiz” Escudero says the perception of Samar as a clique is the result of a “misunderstanding.”

“That has always been a misunderstanding. The Samar group at that time was just me because I couldn’t work at Balay because I wasn’t endorsing Mar (Roxas). The Samar group was not for Noy-Bi,” Escudero told Inquirer editors and reporters on Wednesday night.

Roxas is now the presidential candidate of the ruling Liberal Party (LP).

“Balay” refers to the Liberal Party-dominated team of Roxas, named after the balay na puti (white house) of the Roxas family in Cubao, Quezon City.

Escudero said Mr. Aquino had his campaign headquarters in an old building on Samar Street, near his home on Times Street, Quezon City.

There was not a single poster of Binay there and no meetings or plannings for Binay’s candidacy were held in that house, Escudero said.

“[Samar] gained prominence because it was close to Times (Street) and P-Noy (President Aquino) at that time found it convenient to meet people there instead of in Balay or somewhere else. That was how Samar became slowly but surely the hub,” he said.

Escudero said that from January to March 2010, only he and his team that carried him to victory in the 2007 senatorial election occupied the house, which was owned by real-estate developer Gerry Acuzar.

He said he invited the then Quezon City Hall administrator, now Executive Secretary Paquito Ochoa, to join the team. Acuzar and Ochoa are brothers-in-law.

House Speaker Feliciano Belmonte Jr.’s team also set up shop on the second floor of the house for his own reelection campaign as Quezon City congressman, Escudero said.

At the time, the Samar house was set to be demolished, Escudero said, adding that it was his team that installed fluorescent lights and brought in monobloc chairs to make it usable.

Soon enough, the house became a meeting place between Escudero and Mr. Aquino. The two are close friends.

On Thursday, the Inquirer reported that former Interior Undersecretary Rico Puno, who was identified with the Samar group, was recruiting fellow Masons in LP bailiwicks to work for support to the presidential candidacy of Sen. Grace Poe.

The report revived speculations that Poe is President Aquino’s secret candidate, a day after the Chief Executive said in a news conference in the United States that Roxas is his only candidate for President.

But Poe refused to go with LP and instead launched her own presidential candidacy.