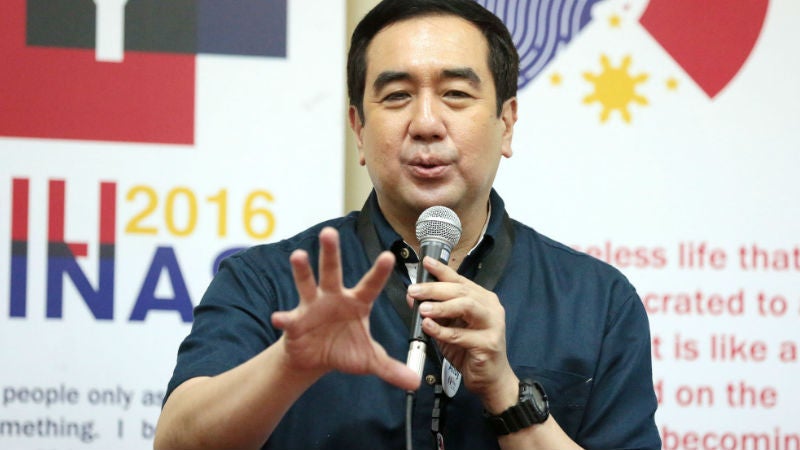 CAGAYAN DE ORO CITY, Philippines–Commission on Elections (Comelec) Chairperson Andres Bautista on Saturday denied there was undue benefit and discrimination in the choice of lead networks to air the presidential debates here.

In an interview at the sidelines of a press briefing, Bautista said the Comelec did not give undue benefit to any party.
He added that it is the lead networks which shelled out the costs and not the Comelec.

“Hindi. Yun hindi ko maintindihan. That’s not true,” Bautista said when asked for his reaction on a Rappler statement that the Comelec committed graft.

Graft is a criminal offense of giving undue benefit to any party causing undue injury to government.

(Those who paid for the debates are the lead networks. It’s not the Comelec that lend any funds for the debate.)
In a statement on Friday, Rappler said the Comelec violated the news outfit’s constitutional right to equal protection and to
free press.

Rappler said it signed the memorandum of agreement for the coverage and live video streaming rights, but these rights were granted only to the television giants.

It added that the grant of benefits to the lead networks without public bidding violate the Anti-Graft and Corrupt Practices Act.

Rappler also accused Comelec of violating the public’s right to information when it allowed the lead networks to choose profit over the public welfare.

“By discriminating against Rappler, its constitutional right to equal protection has been violated. That the discrimination was aimed at restraining Rappler’s free press rights makes the violation all the more reprehensible,” its statement said.

“We are convinced the benefits and advantages accorded the lead networks violate the Anti-Graft Law because they are unwarranted. They were granted to the lead networks without the benefit of any transparent or equitable process; certainly, no public bidding was conducted,” it added.

Rappler also cited the complaint by the Cagayan De Oro Press Club that the local media was barred from covering the event.

In the press briefing, Bautista clarified that 500 seats from the mini theater would be allotted for sectoral representatives from Mindanao, including the local media as observer status.

“Since this is a Mindanao-based debate, we wanted the people of Mindanao to be inside the venue,” Bautista said.

The local media would also be in the media center with the other reporters.

There would also be a gymnasium outside set up with large monitors and that could house up to 2,000 people.

The first debate would be held here on Sunday moderated by GMA-7 and the Philippine Daily Inquirer.

TV5 and Philippine Star will host the debates in Visayas on March 20. ABS-CBN and Manila Bulletin will moderate the Luzon debates on April 24.

Rappler meanwhile was chosen with CNN Philippines and Business Mirror for the vice presidential debate on April 10. TVJ