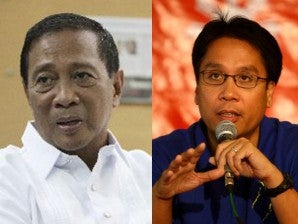 The power play between two factions in President Benigno Aquino’s Cabinet, dubbed the “Balay” and “Samar” groups, has begun anew.

Both camps, named after the location of their headquarters during the 2010 presidential campaign, are vying to fill the void left by Interior Secretary Jesse Robredo, who died in a plane crash on Aug. 18.

Robredo’s successor would be the main item on the agenda at the August 29 meeting of the Liberal Party (LP) at its Balay headquarters in the residence of Transportation Secretary Manuel Roxas, LP president, in Cubao, Quezon City, according to an LP member in the House of Representatives. The lawmaker requested anonymity for lack of authority to speak for the ruling party.

LP leaders are expected to make a spirited move to retain control of the DILG to give the administration party an edge over rivals in the 2013 elections, as the agency oversees local officials—from governors and mayors to barangay (village) heads.

But the source said the emergence of Vice President Jejomar Binay of the Samar group as a potential successor to Robredo in the DILG has led some party members to call on Roxas, who has continued to protest his loss in the vice presidential election, “to step up to the plate and move to the DILG.”

The LP lawmaker said the Balay group would consider it a major disaster to lose the DILG portfolio and to lose it to Binay. “The appointment of Executive Secretary Paquito Ochoa (a Balay member) has been taken as a slight to the LP leaders who asked: ‘Why him?’” the party member said.

Navotas Rep. Tobias Tiangco, secretary general of Binay’s United Nationalist Alliance (UNA), agreed with the observation that the vacancy at the DILG had become another flash point between Balay and Samar.

The UNA is forming its slate for the 2013 senatorial elections, but its offer to forge a “super coalition” with the LP has been rejected. The LP, instead, has opted to join forces with the Nacionalista Party and the Nationalist People’s Coalition.

Kabataan Rep. Raymond Palatino decried the transformation of the DILG into a tool for advancing the political interest of the Aquino administration just like what its predecessor did.

“We have been ‘hostaged’ by this Binay-Roxas factions since 2010; their squabbling represents partisan politics at its worst,” Palatino said.

“The best man for the DILG post, I think, is someone who will be less immune to or less intimidated by the warring factions. Unfortunately, there seems to be no neutral choice anymore since the Roxas-Binay tentacles are already embedded in the bureaucracy,” he said.