Hundreds of millions of ISIS cash destroyed in airstrikes — US 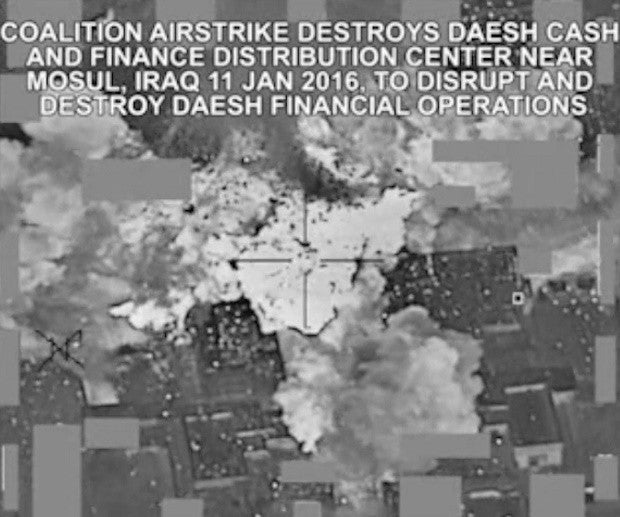 This image made from Jan. 11, 2016 video released by the U.S. military shows an airstrike targeting an Islamic State group cash and finance distribution center near Mosul, Iraq. The extremist group that once bragged about minting its own currency is having a hard time meeting expenses as a result of coalition airstrikes, plummeting oil prices and a cutoff of payments from the Iraqi government, the sum of which has eroded millions from its finances since last fall. The group that built up loyalty among its militants with good salaries and honeymoon and baby bonuses has stopped providing even the smaller perks: free energy drinks and Snickers bars. AP

WASHINGTON, United States — Hundreds of millions of dollars are believed to have been destroyed in coalition air strikes targeting cash hoards used to finance the Islamic State of Iraq and Syria (ISIS) group, a US military spokesman said Wednesday.

Coalition aircraft struck ten more of the cash collection points over the weekend, said Colonel Steve Warren, the spokesman for the US-led campaign against IS in Iraq and Syria.

“We don’t have a hard number that we’re prepared to release. We believe it is in the hundreds of millions of dollars,” Warren told Pentagon reporters in a video conference from Baghdad.

“Obviously it is impossible to burn up every single bill. So presumably they were able to collect a little bit of it back. But we believe it was a significant series of strikes that have put a real dent in their wallet,” he said.

Targeting the cash hoards is part of a broader strategy to disrupt the group’s sources of revenue.

Coalition aircraft also have been hitting oil infrastructure under IS control as part of the effort.

Warren said the impact can be seen in reports that IS has had to cut salaries paid to its fighters, sometimes by as much as half.

“So this to us is a very significant indicator that these strikes against their ability to generate revenue are beginning to squeeze them a little bit,” he said.