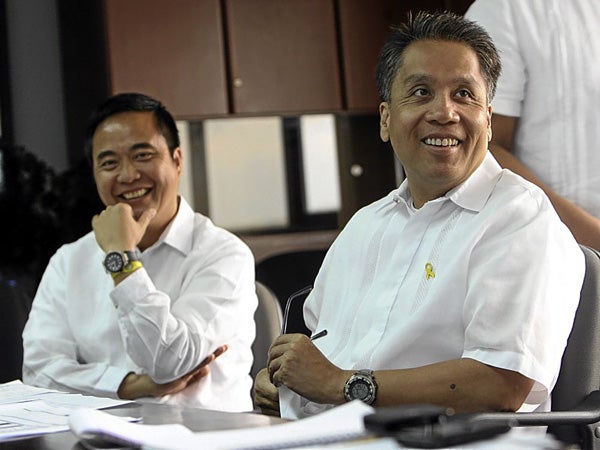 Liberal Party (LP) and administration standard-bearer Mar Roxas and current Department of Transportation and Communications (DOTC) Secretary Joseph Emilio Abaya have both been accused of manipulating events related to the maintenance of Metro Rail Transit (MRT)-Line 3.

READ: After graft rap due to MRT fiasco, Vitangcol pins down Abaya

“I am the only DOTC official charged by the Ombudsman despite the unmistakable knowledge, involvement, participation and instruction of my superiors in the DOTC headed by former Secretary Manuel “Mar” Roxas, current DOTC Secretary Joseph Emilio Abaya, Undersecretary for Legal Affairs Atty. Jose Perpetuo Lotilla and Undersecretary Rene Limcaoco,” said former MRT-3 General Manager Al Vitangcol in his affidavit submitted to the Supreme Court.

He said the four officials “should have been the ones brought to justice for gross and inexcusable inaction if not willful and deliberate manipulation of the events and processes related to the maintenance of MRT3.”

Vitangcol said that when he assumed as MRT-3 General Manager on 2012, the first in his list is the need to ensure a continuation of maintenance services for MRT3.

He said when he learned that the Metro Rail Transit Corporation (MRTC) maintenance agreement with Sumitomo Corporation will expire on Oct. 19, 2012, he wrote a letter then to DOTC Secretary Mar Roxas in May 2012 inquiring on who should undertake the procurement for new maintenance.

However, getting no response from Roxas, on June 19, 2012, Vitangcol said he wrote a memorandum to Lotilla asking him to act on pending request for MRT3.

“These issues were never addressed promptly—which, as I warned, caused future operational problems at MRT3,” he said.

A month later, Vitangcol said he raised with Roxas again the need to bid out new contract for the maintenance of MRT 3. He even suggested that the bidding be carried out by MRTC for lack of time on the part of the DOTC.

Even Chairman and President of MRTC Tomas T. De Leon Jr. sent a letter to Roxas on July 25, 2012 or three months before Sumitomo contract expired. De Leon suggested that they carry the bidding since they can focus on the procurement process under a favorable timeline and at a lower cost. However, Vitangcol said no action was made on the letter.

On Aug. 31, 2012, De Leon transmitted a letter from Philippine Trans Rail Management and Services Corporation (PH Trams) CB&T Joint Venture requesting for an inspection of the entire MRT-3 system in connection with its unsolicited proposal for the maintenance provision and presentation before the MRTC.

Vitangcol said from there, he learned that the uncle of his wife, Arturo Soriano, was one of the incorporators of PH Trams.

Vitangcol and five incorporators of PH Trams was charged by the Ombudsman before the Sandiganbayan for violation of the Anti-Graft and Corrupt Practices Act and Section 65 of the Government Procurement Reform Act.

“I was always of the firm belief that Soriano was no longer connected with PH Trams. This conflict of interest became the focal point of the Ombudsman’s investigation and in the process deliberately lost sight of the more insidious practices that have occurred in the DOTC,” Vitangcol said.

Then, a month before the expiration of the contract on Sept. 28, 2012 and after Sumitomo called the attention of DOTC, Limcaoco created a task force to review the terms of reference of MRT-3 maintenance contract and issue findings within 72 hours.

The task force headed by Vitangcol recommended an immediate resort to bidding a new contract with a period of five years instead of an interim contract.

However, Vitangcol said their recommendation was never followed when the DOTC resorted to an alternative mode of procuring the services for MRT-3 maintenance, an emergency measure without public bidding citing lack of time.

The negotiating team awarded the contract to PH Trams. The contract of which was signed by Abaya.

“I did not play any role in the formulation of that decision because as General Manager of the MRT-3, I have neither the power nor the authority to approve and award projects amounting to more than P5-million,” Vitangcol said.

With the said contract expiring on April 19, 2013, Lotilla then moved for the bid for a temporary maintenance provider.

Meanwhile, Vitangcol said DOTC extended twice the contract with PH Trams which cost the government US$12.170-million or P535.5-million (using the average rate for the period).

Vitangcol said PH Trams De La Cruz is a friend of Abaya which he admitted in the Oct. 6, 2014 interview in GMA-7’s “Bawal Ang Pasaway” with Prof. Solita Monsod.

Then, the DOTC awarded the long-term maintenance contract to Busan Transportation Corporation (Busan) in partnership with four other firms.

Vitangcol said Busan was brought in by Eugene Rapanut, a certified member of the Liberal Party in Ilocos Sur since 1987.

He added that “Rapanut likewise brokered the deal for Dalian Locomotive & Rolling Stock Co. Ltd which bagged the supply of 48 new coaches for MRT3.”

Vitangcol added that MRT3 is also paying “useless insurance premiums” worth more than P100-million annually for the Industrial All Rist (IAR) which was underwritten by the Government Service Insurance System (GSIS). He said he raised the issue with Assistant Secretary Dante Lantin but it was not acted upon.

Then, he said he made various proposals to lower the cost of MRT-3 operations which he sent to the Presidential Management Staff through DOTC’s Aika Robredo (daughter of LP Vice Presidential bet Leni Robredo).

“I never received any response,” he said.

Vitangcol’s affidavit was attached to his omnibus motion which he submitted to the Supreme Court requesting that it implead the Sandiganbayan Third Division in his motion for reconsideration.

Vitangcol is asking the high court to issue a temporary restraining order and/or writ of preliminary injunction on the proceedings before the Anti-Graft Court while his motion before the high court is still pending.

Asked why he did not mention the contents of his affidavits to the Ombudsman, he explained that they focused on the allegation of conflict of interest regarding his relationship with Soriano who was a former incorporator of PH Trams.

(I have submitted to the Ombudsman answers to the allegation. However, if we take it the matter as an isolated case, we will not see the the truth. Here, we will look at what happened from the start up to we finish with the MRT. I have nothing to hide.) RAM

Read Next
Hundreds of millions of ISIS cash destroyed in airstrikes — US
EDITORS' PICK
Smart offers wireless fiber-like speeds to Filipino homes with country’s first 5G Prepaid Home WiFi
Pharmally’s Twinkle Dargani in tears when asked about missing documents
Corruption in PH: Where presidential aspirants stand
Two more sites at Robinsons Malls for temporary offsite passport services
BIR audits tax compliance of Pharmally
Holidays made best with Acer’s ‘Holidays at Home’ raffle promo
MOST READ
Roque ‘hurt’ after presidential aspirant did not adopt him in Senate lineup
Gordon: ‘How dare you ask for Filipinos’ vote when you failed them?’
Pharmally’s Twinkle Dargani in tears when asked about missing documents
WHO chief scientist say Omicron is very transmissible
Don't miss out on the latest news and information.