6 dead of asphyxiation in Bolivia protest 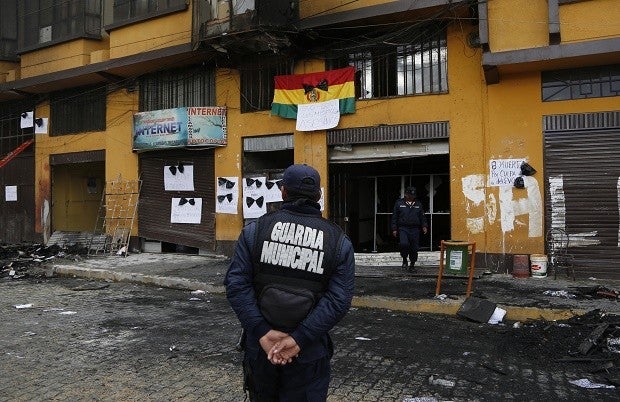 A municipal worker stands guard in front of a municipal building that was set on fire by protesters, in El Alto, Bolivia, Wednesday, Feb. 17, 2016. Several municipal workers died of asphyxiation Wednesday and dozens were injured in the opposition-run highlands city of El Alto. The fire was ignited by protesters following a march by residents demanding better schools and more teachers. AP

LA PAZ, Bolivia — Six city workers died of asphyxiation and 28 people were injured Wednesday when protesters set fire to part of a municipal building in the opposition-governed highlands city of El Alto near Bolivia’s capital.

Two men and two women died in a bathroom where they apparently fled and another man and woman died on a terrace, officials said. In all six cases, carbon monoxide poisoning was the cause, said Polonia Pinto, the director of Holandes Hospital, where the victims were taken.

The deaths come amid heightened political tension as Bolivians decide in a referendum Sunday whether to amend the constitution so President Evo Morales can run for a fourth consecutive term in 2019. Morales campaigned Wednesday in a wealthy southern neighborhood of Bolivia’s capital La Paz, which lies beneath the teeming and poorer El Alto.

The president issued a brief statement saying he had ordered an investigation to find those responsible for the disturbance. “I regret the death of brothers and sisters,” he said.

The fire was ignited by protesters following a march by residents demanding better schools and more teachers.

Mayor Soledad Chapeton, a member of the opposition, demanded to know why police were not present to prevent the violence.

“They irresponsibly did not show up on time,” she told reporters between tears.

Chapeton blamed the fire on provocateurs allied with Morales’ Movement Toward Socialism. She said the attackers removed incriminating documents from the building and set fire to them along with furniture.

Chapeton’s predecessor, Edgar Patana, has been jailed while under investigation for corruption that allegedly included creating phantom jobs to siphon off municipal funds.

At least 16 dead in blast targeting Shiites in Pakistan

Read Next
Pope Francis urges governments to ‘open hearts’ to migrants
LATEST STORIES
Beggar dead in Quezon hit-and-run incident
Prince Harry: ‘No other option’ but to cut royal ties
‘It’s not my shame’: Why Filipino women are calling out sexual misconduct on social media
‘1917’ takes top honor at the Producers Guild Awards
Duterte promises to look for funds to establish rail transport in Cebu
MOST READ
Motorcycle taxis ‘illegal’ starting next week — LTFRB board member
Palace: Crisis over ABS-CBN franchise unlikely
Marcos monument beside Aquino’s stirs Tarlac town
Panelo: Duterte only wants to emulate strong political will of Marcos
Don't miss out on the latest news and information.