No to carpet-bombing ISIS — US general 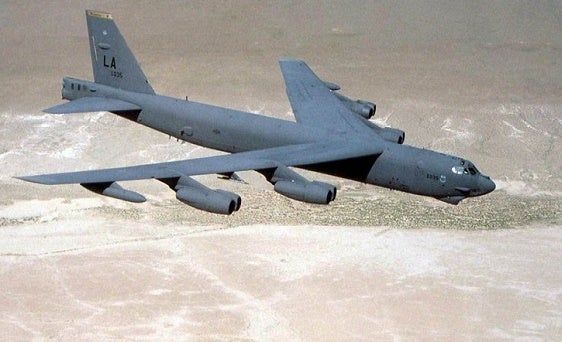 A US B-52 bomber flies over a desert in the US. The plane is capable of carpet-bombing missions but the commander of the US-led coalition fighting ISIS said no to such operations. AP FILE

WASHINGTON, United States — The commander of the US-led coalition fighting the Islamic State group in Iraq and Syria on Monday dismissed calls to carpet- bomb the jihadists.

“We are bound by the laws of armed conflict. It doesn’t only matter whether or not you win, it matters how you win,” Baghdad-based Lieutenant General Sean MacFarland told reporters in a video call.

“Indiscriminate bombing where we don’t care if we are killing innocents or combatants is just inconsistent with our values.”

In recent weeks, hawkish opponents of President Barack Obama’s battleplan to defeat the IS group have called for stepped-up actions against the extremists, even if these lead to higher numbers of civilian deaths.

Most notably, Texas Senator Ted Cruz, who is vying to become the Republican Party’s presidential nominee, in December said America should be carpet-bombing parts of Iraq and Syria.

MacFarland said that is exactly the tactic Russia is accused of using as it wages a separate air campaign in Syria to prop up the regime of President Bashar al-Assad.

“Right now, we have the moral high ground and I think that’s where we need to stay,” the three-star general said.

US commanders have officially recognized the deaths of only 21 civilians in the 18-month-long campaign, which has seen some 10,000 bombs dropped in Iraq and Syria.

Officials frequently point out that many of these munitions are highly sophisticated and can hit a target with great accuracy.

Critics, though, say the number of civilian deaths is likely to be far higher.

MacFarland claimed the anti-IS fight is making progress in both Iraq and Syria, and said the jihadists had lost about 40 percent of the territory they once held.

The most important event to date was the recapture of Ramadi by Iraqi security forces at the end of last year, he said.

But he cautioned that many months of fighting remain, and said Iraqi generals did not think they would be able to recapture Mosul — another key Iraqi city — until the end of 2016 or early 2017 at the soonest.

“That’s their estimate and we are looking at that,” he said, though he noted he was looking at a range of “accelerants” to increase the speed of the fight.

Among the options currently being considered are the deployment of additional Western trainers to help ready Iraqi security forces for what will likely be a complex, difficult battle.