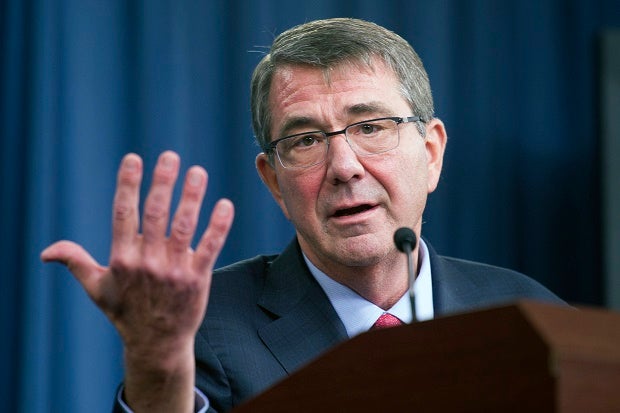 WASHINGTON, United States—US Defense Secretary Ashton Carter will on Tuesday preview the Pentagon’s plans for its 2017 budget, including extra cash to fight the Islamic State of Iraq and Syria (ISIS) group, previously secret mini-drones and a beefed-up US presence in Europe’s east.

The base budget for fiscal year 2017 is expected to be $524 billion, augmented by $59 billion for an “overseas contingency fund” to pay for ongoing military actions in Afghanistan and against IS, defense officials told AFP on Monday.

America’s gargantuan military budget far surpasses that of any other country, and exceeds the combined defense spending of the next eight biggest militaries in the world.

In a speech in Washington, Carter will highlight the world’s changing “threat environment,” one official said, including new risks presented by Russia since its 2014 annexation of Crimea and its subsequent support of pro-Russia separatists in eastern Ukraine.

The official said Carter would announce big increases to the so-called European Reassurance Initiative aimed at countering a Russian threat, and the extra money will be used to pay for significant US troop and equipment increases in countries such as Estonia and Romania.

Carter also plans to unveil some newly declassified technologies, including a small drone that is capable of flying alongside other units in a sort of swarm, another defense official said.

The officials all spoke on condition of anonymity because they were not authorized to discuss Carter’s speech ahead of time.

A third official said the budget includes $7 billion to fight ISIS jihadists, an increase of about 35 percent over last year.

The burgeoning anti-IS budget reflects an expected expansion in the fight against the jihadist group, including in areas beyond Iraq and Syria, like Libya.

The budget is also likely to detail Pentagon plans for the A-10 ground attack plane. The aircraft, developed in the 1970s, had been slated for retirement but has become invaluable in the US-led effort against IS jihadists.

A delay in its retirement could have knock-on effects for other cash-thirsty projects, including the costly F-35 fighter.

Carter is due to give his speech early Tuesday. The full Pentagon budget will be made public next week.