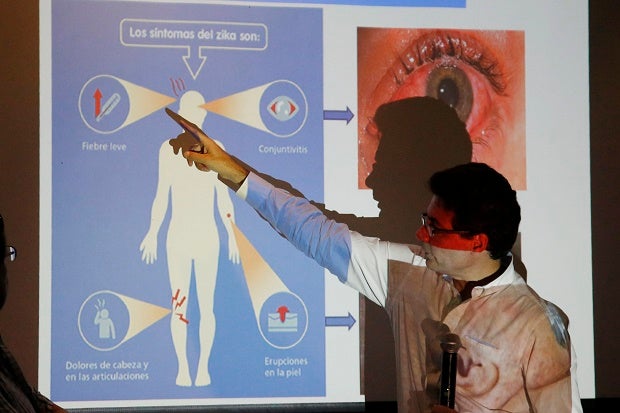 Colombia’s Health Minister Alejandro Gaviria explains the symptoms of Zika during an event to launch a nationwide prevention campaign against the virus in Ibague, Colombia, Tuesday, Jan. 26, 2016. AP File Photo

BOGOTA, Colombia—Colombia fears an explosion in cases of the potentially paralyzing nervous disorder Guillain-Barre syndrome, linked to the mosquito-borne Zika virus that is devastating Latin America, the government said Monday.

Health Minister Alejandro Gaviria said he expected more than 1,500 cases of Guillain-Barre in the South American country, one of the worst hit by Zika.

Scientists suspect Guillain-Barre is linked to Zika, which is also blamed for brain damage in newborn babies, though the World Health Organization says neither link has yet been proven.

“We are currently talking about a rate of 2.3 cases of Guillain-Barre for every 1,000 patients with Zika. That is quite a lot,” Gaviria said on Colombian radio.

Since Colombia is forecasting about 657,000 cases of Zika during the epidemic, it expects over 1,500 cases of Guillain-Barre, he said.

Colombia is the second worst-hit country in the current Zika outbreak, after Brazil.

Brazil has recorded thousands of suspected cases of microcephaly—a disorder that causes babies to be born with abnormally small heads.

Brazilian scientists claim Zika causes microcephaly when it is transmitted by a pregnant mother to her fetus. The WHO’s director general Margaret Chan has called that possibility “extremely worrisome.”

Gaviria said about four percent of sufferers were estimated to die from the disease.

Citing neurologists, he said Colombia was seeing an “explosion” of Guillain-Barre cases lately.

“There is enough of a coincidence in the timing and location of them to say there is clearly a link,” he said.

“The two great concerns are microcephaly and neurological complications,” said Gaviria. “It is like a perfect storm.”

In their latest epidemic bulletin, Colombian health authorities reported more than 20,000 cases of Zika, including 2,100 in pregnant women.

The government has advised women to avoid getting pregnant until at least June.