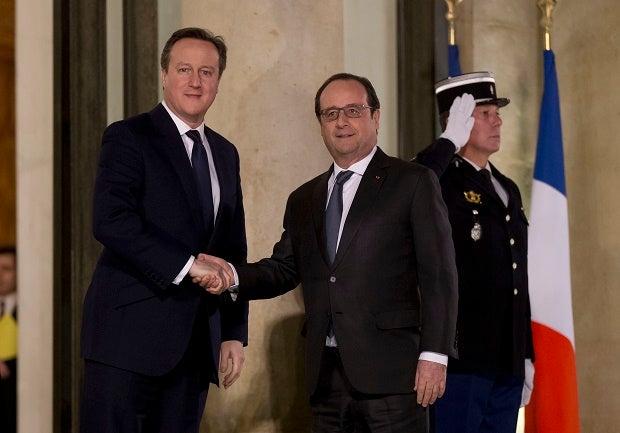 A French official said after the discussions in Paris that there was a “political willingness” to find an agreement, but “more work is needed, particularly on economic governance,” before a key EU summit this week.

Tusk—on a lightning tour to discuss “Brexit,” as Britain’s possible exit from the EU has been dubbed—warned the bloc was at a “critical moment.”

“It is high time we started listening to each other’s arguments more than to our own,” he said during a visit to Romania.

“It is natural in negotiations that positions harden, as we get closer to crunch time. But the risk of break-up is real because this process is indeed very fragile.”

Tusk, president of the European Council, warned the 28 EU leaders to handle the negotiations on Thursday and Friday “with care” because “what is broken cannot be mended.”

Britain, which does not use the euro, wants a deal that will protect it from ever having to pay into a fund to protect the eurozone.

France, which along with Germany is a key decision-maker in the bloc, reportedly fears this could amount to Britain having a veto over the plans of eurozone countries.

Cameron hopes to secure a deal in Brussels that could pave the way for an “in-out” referendum to be held in Britain as early as June.

In London earlier, his spokeswoman said: “We have made progress (on renegotiation) but there’s details to be pinned down.

Cameron wants the EU to recognise a series of principles including that countries outside the eurozone like Britain should not face discrimination or disadvantage.

His spokeswoman said Britain was seeking “significant and far-reaching reforms.”

“There are still details to be pinned down and what matters is that we get the substance right,” she added.

The British prime minister also spoke Monday to Tusk, who was first in the queue in Paris for a meeting with Hollande before Cameron arrived.

Asked if he thought a deal could be pushed through this week, Tusk told reporters: “I hope so.”

In a reminder that whatever deal he strikes is unlikely to satisfy some factions in Britain, the anti-EU UK Independence Party accused Cameron of being a “chicken” after he pulled out of a meeting where its leader Nigel Farage would have been present.

Cameron had been expected to attend a meeting of presidents from each of the European Parliament’s groups during a visit to Brussels on Tuesday.

Instead, Cameron will only be holding a series of bilateral meetings, including with European Parliament president Martin Schulz and three MEPs involved in the negotiations.

The meetings are important because even if the bloc’s leaders agree changes in areas including child benefit payments to EU migrants in Britain, as Cameron wants, the European Parliament must still approve the changes.

The EU is already facing questions about its future as it struggles with the biggest migration crisis in 70 years, and there are fresh fears about the health of the euro currency.

British Foreign Secretary Philip Hammond warned Sunday that the EU will “lurch very much in the wrong direction” if Britain votes to leave.

Hammond also predicted that negotiations at this week’s summit “would go to the wire.”

The ramifications of a British exit from the EU were underlined when the head of HSBC hinted that the global lender could shift its operations to Paris if British voters choose to leave the bloc.

“We are lucky in the sense that we have a major bank in France,” Douglas Flint told BBC radio.

“So, if we were to leave and if there were to be restrictions, ultimately on the renegotiation of Britain’s position, we have the ability to move activity and people between London and Paris,” he said.