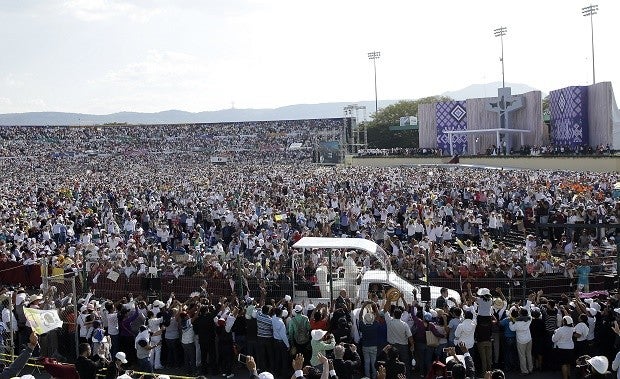 Pope Francis arrives in the popemobile to Viktor Manuel Reyna stadium, in Tuxtla Gutierrez, Mexico, Monday, Feb. 15, 2016. Francis is celebrating Mexico’s Indians on Monday with a visit to Chiapas state, a center of indigenous culture, where he presided over a Mass in three native languages thanks to a new Vatican decree approving their use in liturgy. The visit is also aimed at boosting the faith in the least Catholic state in Mexico. AP

SAN CRISTOBAL DE LAS CASAS, Mexico — Pope Francis denounced the centuries-old exploitation and exclusion of Mexico’s indigenous people Monday and prayed before the tomb of their controversial priestly protector during a visit heavy in symbolism to the rolling hills of southern Chiapas state.

Francis celebrated a Mass for Mexican Indians that featured readings in the native languages of Chiapas, a traditional dance of prayer and the participation of married indigenous deacons, whose ministry had been suspended by the Vatican but was revived under Francis.

The visit, at the halfway mark of Francis’ five-day trip to Mexico, was of great personal importance for the pope. He insisted on visiting San Cristobal de las Casas, where the late Bishop Samuel Ruiz ministered to Mexico’s poorest and supported blending their indigenous culture into Catholic rituals, much to the dismay of Mexico’s church hierarchy and occasionally the Vatican.

In his homily, Francis denounced how, “in a systematic and organized way,” indigenous people have been misunderstood and excluded from society over the course of history.

“Some have considered your values, culture and traditions to be inferior,” he said. “Others, intoxicated by power, money and market trends, have stolen your lands or contaminated them.”

He called for a collective “Forgive me.”

“Today’s world, ravaged as it is by a throwaway culture, needs you!” he told the crowd that included many indigenous people, some in traditional dress, who gathered under clear skies at a sports complex in the mountain city of San Cristobal de las Casas.

The soft sounds of marimbas accompanied the Mass, which was celebrated in front of a replica of the brilliant yellow and red facade of the San Cristobal cathedral, where Francis visited later in the day.

At one point, Francis slipped behind the altar where Ruiz’s tomb is located and emerged a few minutes later after a brief prayer, said the Vatican spokesman, the Rev. Federico Lombardi.

Crowds chanted “Long live the pope of the poor!” and “Welcome, pope of the struggle!” as he arrived for the Mass. Some 500,000 faithful were expected to see the pope in the city, including about 100,000 who gathered on the dirt field.

The pope has frequently expressed admiration for indigenous peoples, and he issued a sweeping apology last year while in Bolivia for the Catholic Church’s colonial-era crimes against America’s indigenous.

He has also spoken out about the need to care for the environment. As archbishop in Argentina, he was heavily responsible for a major document of the entire Latin American church hierarchy in which bishops praised the harmonious way indigenous people live with nature. As pope, he penned an environmental encyclical denouncing the exploitation of the planet by the rich at the expense of the poor.

Indigenous communities have legal rights to much of Mexico’s forest and desert lands, and have long battled with outsiders to protect them — and to share in the revenues they produce. Mining and commercial logging interests that were granted concessions by national or state governments long denuded or polluted indigenous lands.

Francis’ visit to Chiapas and celebration of native culture was in many ways a swipe at the Mexican church hierarchy, which has long sought to downplay the local culture and bristled at the “Indian church,” a mixture of Catholicism and indigenous culture that includes pine boughs, eggs and references to “God the Father and Mother.”

It was a tradition that was embraced by Ruiz, who died in 2011 after some 40 years at the helm of the San Cristobal diocese.

Shortly after midnight, worshippers began filing into the site of the Mass, which included readings, prayers and hymns in the three main indigenous languages of Chiapas: Tzeltal, Tzotzil and Chol, which are spoken by just over 1 million people, according to Mexico’s latest census.

At the end of the Mass, Francis presented members of the indigenous community with an official Vatican decree formalizing approval for another native language to be used at Mass. The Vatican spokesman said approval for the main languages of Chiapas is still pending, but that the fact that Francis used them in a papal Mass was a sign that they could be used locally.

Francis’ predecessor, John Paul II, also dabbled with comments in Indian languages during a 1990 visit to Chiapas, though less formally.

At the end of Mass, indigenous people thanked Francis publicly for the decree and for recognizing their culture.

“The pope’s brings us good news for our life,” said Maria Perez, a Tzotzal 39-year-old who attended the Mass with her family, who translated Francis’ Spanish for her.

Chiapas is Mexico’s poorest state. On Monday, the World Bank reported that, on the whole, indigenous people across Latin America continue to suffer from poverty and exclusion, with the wealth gap widening between the indigenous and the rest of Latin American society.

According to government statistics, while about 46 percent of Mexicans were living in poverty in 2014, the number in Chiapas is some 76 percent.

Francis has insisted that his is a “poor church, for the poor.” After the Mass, he was scheduled to hear testimony from Chiapas families about the hardships they face.

“He comes to redeem an entire struggle by the people,” said the Rev. Marcelino Perez, an indigenous priest who was charged with translating the homily into Tzotzil.

San Cristobal is home to two of the most famed religious defenders of indigenous people in Mexican history: Bishops Bartolome de las Casas in the 16th century and Ruiz, who died in 2011.

Both were beloved by indigenous people and widely reviled among the wealthy classes and much of the church hierarchy. Many officials accused Ruiz of acting on behalf of Zapatista rebels in their 1994 uprising for greater indigenous rights.

Part of the liberation theology movement that swept Latin America after Vatican II, Ruiz tried to fend off the rapid growth of Protestant denominations by adapting to indigenous customs.

One of his controversial measures was to rely heavily on married male lay workers because local culture granted more respect to men with children than to childless, celibate men such as priests. Some in the church worried the married deacons were taking on priestly functions.

In 2002, under Pope John Paul II, the Vatican asked the Chiapas diocese to halt deacon ordinations. But under Francis, the ordinations were renewed and members of the diaconate participated in Monday’s Mass.

Read Next
6.2-magnitude quake hits off New Zealand coast—USGS
EDITORS' PICK
Look Through: The fate of impounded stray dogs
House energy committee chair Arroyo bats for cheap electricity
What to watch out for when selecting a video surveillance solution
23,000 cops to be deployed nationwide for school reopening
Unleash the photographer in you this World Photography Day with vivo smartphones
DOH says COVID-19 cases plateauing, but public shouldn’t be ‘complacent’
MOST READ
Sharon Cuneta asks for prayers for friend in ICU who suffered silent stroke
Korina Sanchez reunites with former ABS-CBN co-anchors Julius Babao, Cheryl Cosim
Light therapy could be the answer to your sleep problems
Solons file resolutions seeking probe on ABS-CBN, TV5 merger
Don't miss out on the latest news and information.