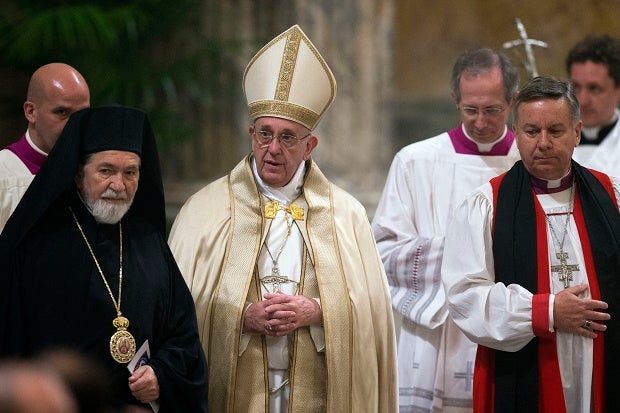 Pope Francis is flanked by Ortodox Primate of the Metropolis of Italy Gennadios Zervos, left, and the representative of the Archbishop of Canterbury to the Holy See David Moxon, at the end of the second Vespers prayer in St. Paul Outside the Walls Basilica on the occasion of the liturgical Feast of the Conversion of St. Paul the Apostle, in Rome, Monday, Jan. 25, 2016. AP Photo

VATICAN CITY, Holy See—Pope Francis has concluded an annual weeklong prayer for Christian unity by making a sweeping apology for Catholic wrongs committed against other Christians and by announcing he will visit Sweden to mark the 500th anniversary of the start of the Protestant Reformation.

The one-day trip Oct. 31 to the southern city of Lund, where the Lutheran World Federation was founded in 1947, will be the first papal visit to Sweden since Pope John Paul II toured five Scandinavian nations in 1989.

Francis has followed in the footsteps of his predecessors by encouraging efforts to heal the rifts with Anglicans, Lutherans, Orthodox, evangelicals and other Christian denominations. But Francis has also used personal friendships to forge ahead where official dialogue has stalled.

On Monday, Francis celebrated an annual vespers service to mark the end of a weeklong prayer for Christian unity which this year also falls during Francis’ Holy Year of Mercy.

In his homily, Francis asked forgiveness for the “sin of our divisions”—an appeal he made in June last year during a visit to a small evangelical house of worship in northern Italy.

“As the bishop of Rome and pastor of the Catholic Church, I would like to invoke mercy and forgiveness for the non-evangelical behavior of Catholics toward Christians of other churches,” he said Monday. “At the same time, I invite all Catholic brothers and sisters to forgive if today, or in the past, they have suffered offense by other Christians.

“We cannot cancel what has happened, but we don’t want to let the weight of past harm continue to pollute our relations.”

Earlier Monday, the Vatican said Francis’ visit to Sweden will “highlight the important ecumenical developments that have taken place during the past 50 years of dialogue between Catholics and Lutherans.” It will include a common worship service based on a recently published Catholic Lutheran liturgical guide to help churches commemorate the Reformation anniversary together.

The Catholic Church estimates there are about 150,000 Catholics in Sweden, including 113,000 registered members, according to Kristina Hellner of the Catholic Diocese of Stockholm.

Martin Luther’s challenge to the Catholic doctrine of indulgences in 1517 is remembered as the start of the Reformation, from which the Protestant churches originated out of criticism of the Church of Rome led by the pope.

Significantly, when Francis issued his apology Monday, he said he was doing so as bishop of Rome—a title he often emphasizes in ecumenical settings where the primacy of the pope is still a cause for tension.