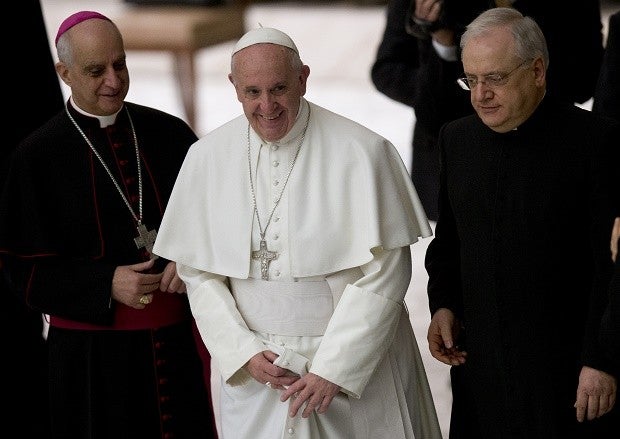 Pope Francis is flanked by Monsignor Vincenzo Paglia and Father Leonardo Sapienza at the end of an audience with workers of the Catholic Shrines in the Paul VI Hall at the Vatican, Thursday, Jan. 21, 2016. AP

VATICAN CITY — Pope Francis has changed church regulations to explicitly allow women and girls to participate in the Easter Week foot-washing ritual, after having shocked many Catholics by performing the rite on women and Muslims just weeks after he was elected.

Proponents of women’s ordination hailed Francis’ decree, while traditionalist Catholics warned that it would weaken the church and lead to questions about the inviolability of the all-male priesthood.

Vatican rules for the Holy Thursday rite had long called for only men to participate. Popes past and many priests traditionally performed the ritual on 12 Catholic men, recalling Jesus’ 12 apostles and further cementing the doctrine of an all-male priesthood.

Shortly after he was elected, Francis raised conservative eyebrows by performing the rite on men and women, Catholics as well as Muslims, at a juvenile detention facility in Rome.

He has continued to include men and women, young and old, sick and healthy and people of different faiths, traveling each year to encounter them to show his willingness to serve. It was a tradition he began as archbishop in Buenos Aires.

On Thursday, the Vatican published a decree from the Vatican’s liturgy office introducing an “innovation” to the church’s rules that better corresponds to Francis’ way of doing things.

The decree said the rite can now be performed on anyone “chosen from among the people of God.” It specifies that the group can include “men and women, and ideally young and old, healthy and sick, clerical, consecrated and lay.”

Priests must make sure that those participating are instructed beforehand as to the significance of the gesture, the decree said. While the phrase “people of God” generally refers to baptized Christians, the decree also said that pastors should instruct “both the chosen faithful and others so that they may participate in the rite consciously actively and fruitfully.” That could suggest that the rite could be open to non-Catholics as well.

In an accompanying letter, dated Dec. 20, 2014 but released Thursday, Francis wrote to the head of the liturgy office saying he wanted to change the current rules “to fully express the significance of Jesus’ gesture … his giving of himself to the end for the salvation of the world and his unending charity.”

The Women’s Ordination Conference, a group that has long advocated for female priests, celebrated the decree as a sign that “change is possible.” But it noted that Francis’ wishes clearly met resistance within the Vatican, given his letter requesting the change was dated more than a year ago.

Cardinal Robert Sarah, head of the liturgy office, is a staunch conservative.

“Our prayer during this Year of Mercy is that the inclusion of women in the church not stop at our feet, but will be one of many signs to include women fully in the institutional church,” the group said in a statement.

The traditionalist blog Rorate Caeli, meanwhile, warned that the accommodation could lead to questions about the inviolability of the all-male priesthood and bring the Catholic Church the way of the Anglican Communion, which has been badly divided over allowing female priests and bishops and blessing same-sex unions.

“What is most tragic is to see the very same impulses that imploded Anglicanism imposed on Latin Church decades later,” Rorate Caeli said Thursday.

READ: Pope lays out case for mercy in book