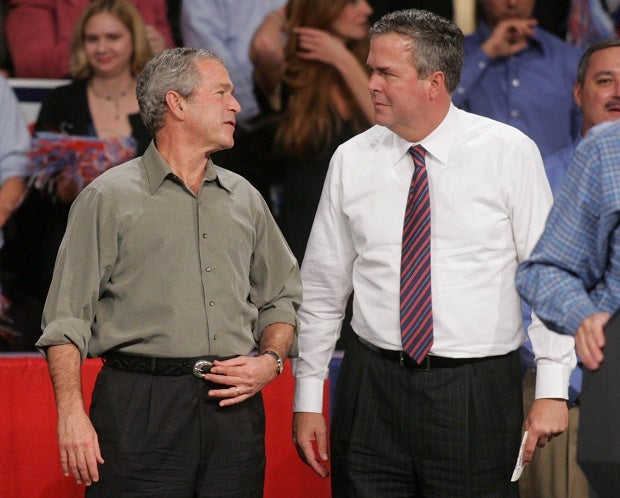 In this Nov. 6, 2006, file photo, President George W. Bush jokes with his brother Florida Gov. Jeb Bush in Pensacola, Fla., where the president was drumming up support for local Republican candidates. Jeb Bush is summoning his brother, former President George W. Bush, to campaign for him in South Carolina. Its not without risks, but the Bush family has long, deep political ties in the state, and the former Florida governor has little choice if he wants to join his father and brother as Oval Office occupants. AP File Photo

CHARLESTON, United States—Former US president George W. Bush was launching into the caustic Republican nomination fray Monday in support of his candidate brother Jeb, whose rival Donald Trump unleashed a new round of invective at his challengers.

The political rhetoric in the presidential race has sharpened dramatically since the Iowa caucuses and the New Hampshire primaries earlier this month ahead of next Saturday’s crucial South Carolina primary.

The mini brawls were on the verge of spilling into open warfare ahead of the February 20 vote, the third statewide contest in the long battle for the Democratic and Republican nominations to run for president.

Jeb Bush, the onetime favorite seeking to build momentum in a state where his dynastic family remains popular, was preparing to campaign later Monday—President’s Day in the United States—with his brother, who was making his first appearance stumping for Jeb.

Trump rounded on the former president during Saturday’s debate in a bid to blunt any Bush progress, and he continued the assault Monday at a press conference, slamming George W, who was president during the 9/11, 2001 terror attack on the World Trade Center.

“So you had that. You obviously had the war which was a big mistake. I think few people would say the war in Iraq was a positive,” Trump said.

And he repeated his threat to sue Cruz over his eligibility to be president, with Trump insisting that Cruz, who was born in Canada, is not a natural born citizen as the US Constitution requires candidates to be.

At an event in Mount Pleasant, the brash billionaire also lashed out at the party itself, calling the Republican National Committee a “disgrace” after he was loudly booed at Saturday’s Republican debate by an audience that Trump said was stacked with establishment lobbyists.

“The whole room was made up of special interests and donors, which is a disgrace from the RNC,” Trump said. “The RNC better get its act together.”

Trump leads by a stunning 20 points over Cruz in the Palmetto State, known for its brutal political atmosphere.

Senator Marco Rubio, who is seeking a resurrection after fizzling in New Hampshire and finishing fifth there, is third at 14.3 percent, followed by a 10.5-percent showing for Ohio Governor John Kasich, whose impressive second place New Hampshire finish was helping him surge here.

Bush is fifth at 10 percent, with former neurosurgeon Ben Carson pulling up the rear in South Carolina with 4.5 percent.

Adding to the campaign intensity, and perhaps tearing at the very fabric of the Republican Party, candidates were digesting the implications of the political thunderclap brought by the sudden death of conservative Supreme Court justice Antonio Scalia.

His death Saturday has set off an epic election-year battle over his successor that will shape American life far into the future.

Meanwhile, Kasich has positioned himself as the man above the fray, presenting a heartening, optimistic message to voters and urging them not get sucked into the Republican-on-Republican vitriol that he says only increases the chances of a Clinton victory in November.

Democrat Hillary Clinton and her surprisingly strong challenger Bernie Sanders were converging on Nevada, which holds its vote Saturday, before they too shift to South Carolina for their own southern slugfest.

Read Next
No ‘Brexit’ deal for Cameron in Paris after EU chief’s warning
EDITORS' PICK
10 Filipinos positive for COVID-19 in UK, 7 in Ireland — envoy
Nograles: Cabinet members to donate 75% of monthly salary to aid COVID-19 fight
Quick chat with Nicole Andersson: ‘You really don’t need much to be happy’
IATF to LGUs: Issue ordinances vs attacks on frontliners, COVID-19 patients
Diokno to Duterte: OK to make fun of buck tooth, but focus on people’s needs first
Robredo spox thanks Duterte for defending VP’s efforts vs COVID-19
MOST READ
Coronavirus hotbed Rizal to shut borders on April 6
Sotto on Isko Moreno’s call: We do our job without the media following our every move
ADB warns PH against prolonged lockdown
Gov’t mulling quarantine period extension of 15-20 more days
Don't miss out on the latest news and information.