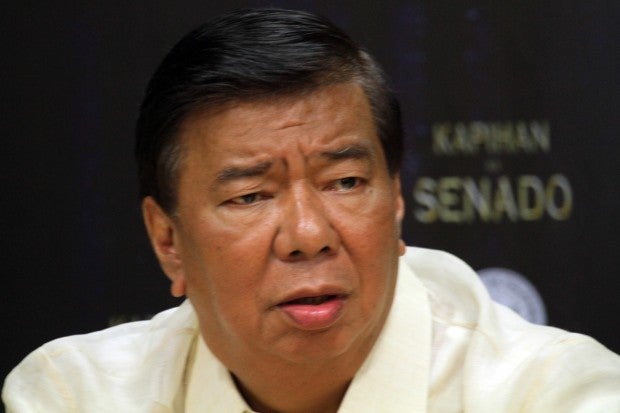 “Does the rating of Mar Roxas, which is not on top, a concern to us? Of course, it’s a concern,” Drilon, vice chairman of the Liberal Party, said during the “Kapihan sa Manila Bay.”

“No question about that. But what gives us comfort is that there’s steady improvement in the surveys of Mar Roxas. He’s now tied for number 2 and in the next three months, we’ll be explaining our platforms to our people,” he said.

Senator Grace Poe, an independent candidate, emerged as the voters’ top choice for president in the upcoming national elections in May based on the latest survey conducted by Pulse Asia. Vice President Jejomar Binay came in second with 23 percent, followed by Roxas and Davao City Mayor Rodrigo Duterte with 20 percent. Senator Miriam Defensor-Santiago was fifth with 4 percent.

Furthermore, Drilon expressed confidence that Roxas’ numbers would further improve before the election day since the administration has the “biggest political machinery” and has the “most credible campaign manager” in the person of President Benigno Aquino III himself.

“We are confident, we have the biggest political machinery in the campaign. We’ve the most credible general campaign manager and that is President Benigno Aquino,” he said.

Drilon said he could not recall any outgoing president with a high popularity ratings as that as of Aquino.

“And therefore, we’re confident that over the next three months, we’d be able to bring the numbers of Mar Roxas and Leni Robredo especially that were standing on the platform of ‘daang-matuwid’ (straight path),” he said.

“So we will not attempt, Mar Roxas will not attempt to have a different platform of continuity. Ang sabi nga nya kung may kulang pa, pupunuan (As he said, if there is a lack of anything, it should be fulfilled).”

Drilon then urged the public to vote wisely in May, saying they can choose the leaders who can continue what the Aquino administration has started or go back to the “old ways.”

“We have made gains for the past six years. The critics, notwithstanding, I think they can’t deny the fact that we have made tremendous gains,” he said.

“The issue, therefore, is that should we choose the leaders who can continue what we have started or do we go back, the danger of going back to our old ways will be there so this is what confronts our country today and I urge our people to choose wisely…” RAM