Faith coalition: How did Comelec get away with leaving out poll safety features? | Inquirer News
Close
menu
search

Faith coalition: How did Comelec get away with leaving out poll safety features? 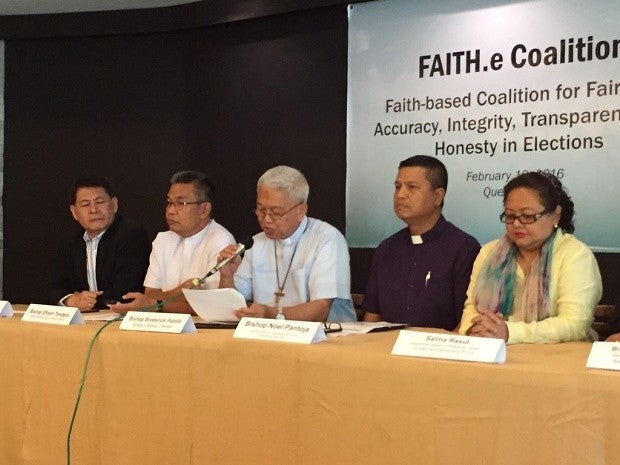 Leaders representing four religious sectors gathered on Wednesday to form a coalition asking the Commission on Elections (Comelec) to fully implement Republic Act 9369 or the Election Automation Law which they believe would ensure the conduct of “honest and credible elections.”

At a press conference in Quezon City, the coalition, which goes by the name FAITH.e (Fairness, Accuracy, Integrity, Transparency, and Honesty in Elections), asked the Comelec to restore the “security features” mandated in RA 9369 which were supposedly not implemented in the 2010 and 2013 automated polls.

(Our plea to the current Comelec administration is to make it their legacy to [implement] the safety features that are mandated by the law. We do not wish for any change. What we ask for is what is already in the Constitution.)

The coalition, which is composed of leaders from the Roman Catholic, Protestant, Evangelical, and Muslim church and religious groups, laid out the five security features that they want the poll body to implement. These are:

READ: CBCP issues guidelines to Catholic voters ahead of 2016 polls

On his part, Manila Auxiliary Bishop Broderick Pabillo slammed the Comelec for holding the past two automated elections sans the security features mandated in RA 9369.

(A big question to us: if you fail to implement the law, won’t you be liable? It has been two elections, and you still have not enforced the law, is there no liability in that? Citizens are held liable for violating the law, what more the institution?)

The Manila bishop emphasized the need of placing the security features on the vote counting machines which will be used so as to maintain the transparency and credibility of the upcoming elections.

(This is a moral issue, all votes must be counted and honored. We have seen that there is a lack transparency because these safeguards are placed to bring about a transparent and credible election.)

Tendero said that the group does not want to lock horns with Comelec.

(We are not antagonizing the Comelec. We are here to be allies of Comelec and to remind them to continue fulfilling their duties based on the provisions of the Constitution.)

The group also clarified that they are concerned primarily with the holding of credible elections and will not endorse or support any candidate.

Last January, the Comelec demonstrated the security features of the new vote-counting machines which will be used in May.

The features include a secured source code, an ultraviolet lamp to verify ballots, digital signatures from the BEI and the voter verification paper audit trail (VVPAT).

However, the poll body expressed apprehension on activating the VVPAT because it might be used by voters to sell their votes.

Read Next
Drilon admits Roxas’ standing in surveys a ‘concern’
EDITORS' PICK
House energy committee chair Arroyo bats for cheap electricity
Former Ramos aides remember their 24/7 boss
US to work with PH in resolving rights issues, says Blinken
TNT brings Sarah G and Mimiyuuuh together for epic collab
Blinken assures Bongbong Marcos: PH-US alliance can grow stronger
Smart boosts regular load with free data via new Extra Load offers
MOST READ
Bongbong and Imee
Cherie Gil, veteran actress, passes away at 59
Signing up with South Korean company a full-circle moment for 4th Impact
Why living in the province could be the next big thing
Don't miss out on the latest news and information.