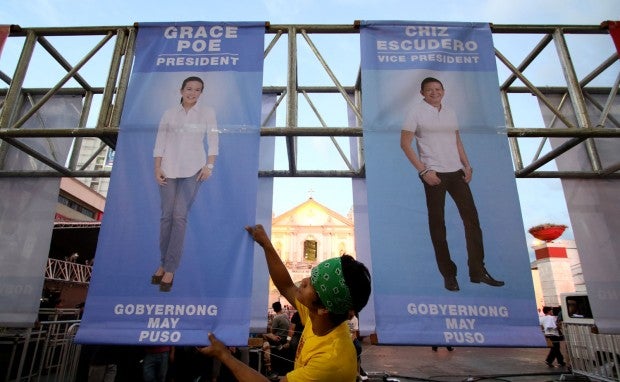 Tarpaulins displayed in front of Quiapo Church bear the images of senators Grace Poe and Francis Escudero.  RICHARD A. REYES

Senator Grace Poe and her team Partido Galing at Puso (PGP) officially kicked off their campaign on Tuesday at the historic Plaza Miranda, just in front the Quiapo Church in Manila.

The start of the campaign came at a time as Poe continued to keep her lead in the latest presidential surveys conducted by the Pulse Asia and the Standard-Laylo and as the Supreme Court resumed its oral arguments on the disqualification cases against her.

The SC is deliberating Poe’s petition seeking to reverse the Commission on Election’s decision cancelling her certificate of candidacy for president because of questions regarding her citizenship and residency.

A motion for reconsideration has also been filed at the SC seeking to reverse the Senate Electoral Tribunal’s dismissal of a quo warranto petition filed by defeated senatorial bet Rizalito David seeking to Poe as senator because of her citizenship.

Poe, in earlier statements and interviews, explained why she chose Plaza Miranda as the site of their kick off rally.

“Quiapo Church is significant because it is a symbol of the devotion of our people to the Black Nazarene, and their faith that nothing is insurmountable with God’s grace,” she said in a statement last week.

Poe said that her adoptive mother, Susan Roces, has also been a devotee of the Black Nazarene.

(Ever since I was a child, my mother was already a devotee of the Nazarene and she shared that with me.)

(I have gone through a lot in life, not just in politics. But every time I go inside the church and after praying, I would feel like someone’s telling me not to give up. It has a symbolic meaning to my life, so I continue to do it.)

A medley song number from the female group Aegis opened the kick off rally of the Partido Galing at Puso led by its standard-bearer, Senator Grace Poe, at the Plaza Miranda in Quiapo Manila on Tuesday.

The program started shortly after 4:00 p.m.

Senator Vicente “Tito” Sotto III and Bayan Muna Rep. Neri Colmenares were among the senatorial bets who first arrived at the venue.
Aside from Poe, also in attendance was her running mate, Senator Francis “Chiz” Escudero.