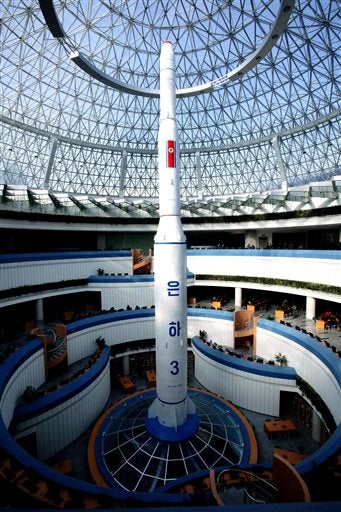 In this Feb. 3, 2016, file photo, a model of the Unha 3 space launch vehicle is displayed at the Sci-Tech Complex in Pyongyang, North Korea. The Unha 3 rocket that launched the Bright Star satellite into space in 2012 is a symbol of North Koreas technological successes and a matter of great national pride. AP

SEOUL — North Korea’s widely-condemned launch of a long-range rocket could happen within a matter of hours, after Pyongyang shortened and brought forward the start of the launch window to Sunday morning.

An updated notification sent by Pyongyang to UN agencies on Saturday — a copy of which was released by the South Korean government — said the launch would now take place between February 7-14.

The initial window announced by the North on Tuesday had been February 8-25.

The planned satellite launch has been slammed by the international community as a disguised ballistic missile test that amounts to another serious violation of UN resolution, following the North’s nuclear test last month.

The brief updated notice sent by Pyongyang offered no reason for the date change.

The North insists its space program is purely scientific in nature, but the United States and allies, including South Korea, say its rocket launches are aimed at developing an inter-continental ballistic missile (ICBM) capable of striking the US mainland.

While the prospective launch dates were changed, there was no amendment to the 7:00am-midday (2230-0330 GMT) daily window.

That means the rocket could blast off during the biggest annual US sports event of the year — the Superbowl, which kicks of at 8:00am Monday, Pyongyang time.

Predictions of an imminent launch have been bolstered by recent satellite images of fuel tankers at the Sohae satellite launch complex in northwestern North Korea.

The US and its allies have warned Pyongyang it would pay a heavy price for pushing ahead with launch, but analysts say the North’s timing has been carefully calculated to minimise the repercussions.

With the international community still struggling to find a united response to the North’s January 6 nuclear test, the rocket launch — while provocative — is unlikely to substantially up the punitive ante.

Western intelligence experts said that satellite had never functioned properly, and argued that this proved the mission’s scientific veneer was a sham.

The flight plan coordinates for the upcoming launch are almost identical to those followed by the three-stage Unha-3 rocket launched in 2012 — suggesting the same carrier would be used again.

The separated first stage was predicted to fall in the Yellow Sea off the west coast of South Korea, followed by a second stage splashdown in the Philippine Sea.

Despite Pyongyang’s bellicose claims to the contrary, the North is still seen as being years away from developing a credible inter-continental ballistic missile (ICBM).

Orbital rocket launches, experts say, are relatively straightforward compared to the challenge of mastering the re-entry technology required to deliver a payload as far away as the United States.

The US-led campaign to impose harsh new sanctions on North Korea over its latest nuclear test have faced opposition from the North’s main diplomatic protector, China.

On Friday, both US President Barack Obama and South Korean President Park Geun-Hye spoke by phone with Chinese leader Xi Jinping, urging him to back punitive measures against Pyongyang.

While infuriated by North Korea’s refusal to curb its nuclear ambitions, China’s overriding concern is avoiding a collapse of the regime in Pyongyang and the possibility of a US-allied unified Korea on its border.