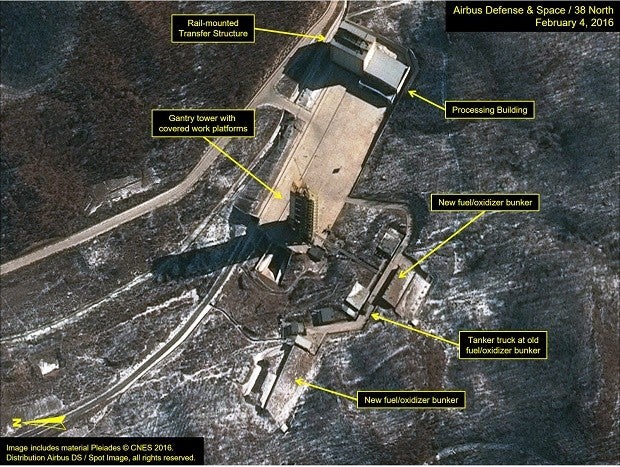 This image provided by the US-Korea Institute at the Johns Hopkins School of Advanced International Studies via 38 North and via a satellite image from Centre National d’Études Spatiales and Airbus Defense & Space / Spot Image, shows a satellite image captured Feb. 4, 2016, of the Sohae lauch facility on the west coast of North Korea, in Cholsan County, North Pyongan Province. The website 38 North says that North Korea appears to have brought in fuel in preparation for a rocket launch it plans to conduct in defiance of international sanctions this month. AP

North Korea’s planned launch of a long-range rocket could happen within a matter of hours, after Pyongyang shortened and brought forward the start of the launch window to Sunday.

An updated notification sent by Pyongyang to UN agencies on Saturday — a copy of which was released by the South Korean government — said the launch would now take place between February 7-14.

The initial window announced by the North on Tuesday had been February 8-25.

The planned launch has been condemned by the international community as a disguised ballistic missile test that amounts to another serious violation of UN resolution, following the North’s nuclear test last month.

The updated notice sent by Pyongyang offered no reason for the date change which means the launch would now take place before the February 16 birthday of late leader Kim Jong-Il, the father of current leader Kim Jong-Un.

The North insists its space program is purely scientific in nature, but the United States and allies, including South Korea, say its rocket launches are aimed at developing an inter-continental ballistic missile capable of striking the US mainland.