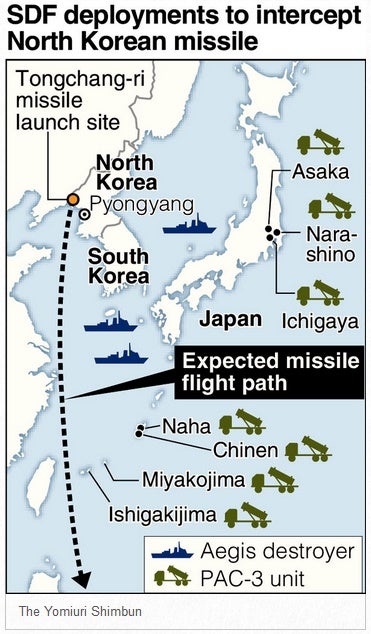 Although the government believes the missile North Korea plans to launch is very unlikely to have any impact on Japanese territory, it is taking no chances in its preparations to shoot down the projectile should the need arise.

The sea areas where it is believed the long-range ballistic missile could fall are far from the main Japanese islands, but the government has established a two-stage defensive strategy involving Aegis-equipped destroyers and Patriot Advanced Capability-3 (PAC-3) surface-to-air guided missile units.

Three Aegis destroyers armed with SM-3 missiles capable of making interceptions above the atmosphere have been deployed. These Maritime Self-Defense Force destroyers are backed up by ground-based PAC-3 units that can shoot down missiles at altitudes of 10 kilometers to 20 kilometers.

The missile will not be shot down if defense authorities decide it is only passing through Japanese airspace, or if it is expected to fall in international waters. This decision will be made instantly after the missile is launched, and will be based on information collated from sources including early warning satellites and Aegis radar systems.

On Thursday, an MSDF transport vessel carrying PAC-3 units left Kure Naval Base in Hiroshima Prefecture, bound for Ishigakijima and Miyakojima islands in Okinawa Prefecture. Although arrangements for deploying the units were still being made with local authorities, a senior Defense Ministry official said the vessel had left port “because it will take a few days” to reach the islands.

PAC-3 units are already in place at Naha Air Base and Chinen Sub Base in Okinawa Prefecture, and at the Defense Ministry in Ichigaya, Tokyo; Camp Asaka in Saitama Prefecture; and Camp Narashino in Chiba Prefecture.

Unease about the launch is growing in Okinawa Prefecture, over which the missile could pass. At an explanatory meeting the central government held for municipal authorities at the prefectural government office on Thursday, attendees asked questions such as, “Should schools stay open during the announced launch window?” and “How soon after the launch will the missile fly over Okinawa?”

North Korea has notified the International Maritime Organization that it will launch a “satellite” between 7 a.m. and noon (7:30 a.m. and 12:30 p.m. Japan time) sometime from Feb. 8 to Feb. 25. However, precisely forecasting the date and time of the launch is extremely difficult.

In April 2009, North Korea launched a missile on the second day of the five-day window it had announced to the IMO. In April 2012, its missile blasted off on the second day of a five-day window, and in December that year it fired a missile on the third day of a 13-day window. The latest announced launch window is comparatively long at 18 days, and the intention of the administration of North Korean leader Kim Jong Un remains unclear.

Kim Jong Il’s birthday is Feb. 16, which falls within the announced launch window. “It’s highly likely the missile will be launched by several days before his birthday,” a Japanese government official said, expressing a view with some support within the government.

North Korea is expected to pay close attention to the weather during the upcoming period to avoid a launch failure. According to a private U.S. weather forecaster, northwestern North Korea is likely to have mostly cloudy weather from Monday, although there also will be some fine days.