Attack on the press a threat to democracy, says Bangladesh president 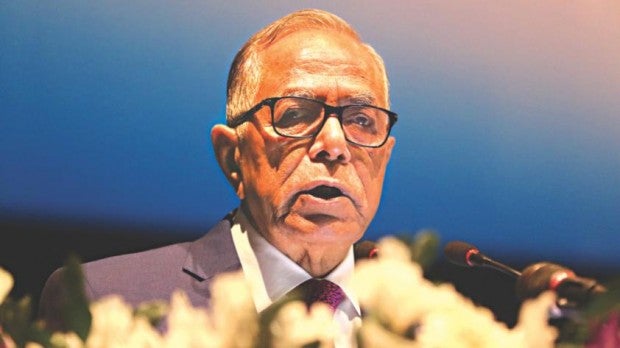 President Abdul Hamid on Friday said any attack on the press is a threat to democracy and that journalists must unite to fight the evil forces.

“The government believes in the freedom of the press. We want newspapers to exercise this freedom responsibly to serve the country. Any attack on the press is also a great threat to democracy. Journalists have to unite and fight against these evil forces,” he said.

READ:  The nature and importance of a free press

The president was speaking as the chief guest at a program marking The Daily Star’s 25th anniversary in the capital’s Osmani Auditorium.

He hoped all newspapers would continue to contribute to the country’s development through responsible journalism.

“They [newspapers] need to play a proactive role in preserving democracy and upholding the values of the country’s constitution.”

Terming newspapers the mirror of a country, Hamid said free flow of information and freedom of expression are important for proper development of the mass media.

Besides enacting the Right to Information law, the government has been extending all-out cooperation so that the media can run independently. But independence does not mean doing whatever one wishes, he said.

Underscoring the importance of newspapers, the president said during the Pakistan period, newspapers courageously stood against the West Pakistani rulers’ oppression of the Bangali people, asserting the common man’s demand for the right to freedom.

“During the Liberation War, the international media were instrumental in creating global public opinion in favour of the cause of our freedom struggle. After independence, newspapers devoted their creative energy to the rebuilding of the war-torn nation.”

Most newspapers have maintained a secular and democratic stance and played a patriotic role at various critical junctures for the country, he said.

Newspapers voiced the woes of downtrodden people of the society for establishing their rights. “Their intellectual input to planning and implementation of various development policies such as women’s empowerment, poverty reduction, and urban and rural development is well-recognised,” said the president.

Hamid said English language dailies have a special place in the media scene, as they have connected Bangladesh to the global audience and brightened the image of the country by highlighting its successes.

Among them, The Daily Star deserves a special mention, he said.

Besides publishing news and opinions, The Daily Star is very committed to social causes such as tackling climate change, saving rivers and the environment, protecting the rights of children and women, and various development issues.

The president applauded the daily’s initiative to honour distinguished people from different fields every year in recognition of their achievements in their respective fields. He also praised the newspaper for awarding top performing students of O- and A-level to encourage them to contribute to the country’s advancement.

He hoped that The Daily Star would continue such efforts.

Hamid said the media should have the courage to call a spade a spade, which can take a journalist to the peak of his professional excellence.

“You will criticize the government and also me. However, you have to keep in mind that it should be based on facts. It should not be biased in any way. Constructive criticism can play an important role in making the right decision for running the government and building the nation.”

On terrorism and militancy, he said these issues are not confined to the boundaries of any country. They are global phenomena now. “The mass media will have to equip itself with latest technology to resist and unearth various technology-based organized crimes at local and international levels…”

Hamid said the media would have to play an active role so that no one could do anything evil by misusing religion. At this moment, the media, especially newspapers, must work together to fight extremism and terrorist activities.

He said Bangladesh is a land of religious harmony and “we will never compromise with this tradition”.

Responsible and professional practice of the press serves people with correct information and helps them enhance their knowledge and awareness, added the president.

The heart has its reasons, LJM says in last text message