The heart has its reasons, LJM says in last text message 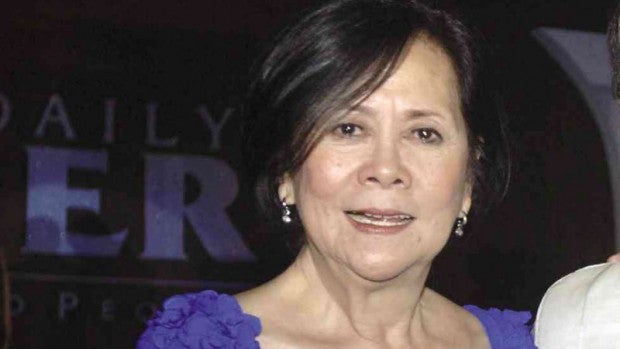 In her last editorial instructions sent through text message on the afternoon of Dec. 21, Inquirer editor in chief Letty Jimenez-Magsanoc asked me to make sure our Lifestyle writers gave prominence and lots of details on the euphoric and dramatic win of 2015 Miss Universe Pia Alonzo Wurtzbach.

“I told Thelma (Sioson-San Juan, Lifestyle editor) to give the behind-the-scenes blow-by-blow (details) that only our Lifestyle (section) can give readers. What interesting times indeed!” said LJM, the most powerful initials in our company.

She was referring to the intimate details that San Juan and her team knew about Wurtzbach, who had worked with Lifestyle as part-time stylist for fashion pictorials before taking on the Universe. The whole world had witnessed the beauty queen’s incredible victory that was almost derailed by pageant host Steve Harvey’s monumental blunder, but the Inquirer had inside information we could share with the readers.

That was vintage LJM: Though grounded at home by back pains, she was not one to miss any opportunity to make Inquirer stories new and different.

A day in the life of our newsroom would begin with LJM’s phone calls as she fired off instructions to be relayed to reporters and editors on what leads to pursue, what colorful details to include, what new angle and photos would make for a compelling story.

“Make sure to include the new moon detail,” she instructed when reporter Marlon Ramos submitted his story summary on why the camp of Liberal Party standard-bearer Mar Roxas chose a particular day to announce his candidacy.

When Vice President Jejomar Binay delivered his “alternative Sona” after President Aquino’s last State of the Nation Address in July, LJM, who was then on vacation, called to say that the most interesting angle was the VP’s roll call of the 44 Special Action Force commandos who perished in the Mamasapano debacle.

“It’s the only part of the Binay speech that was not predictable,” she said.

Noting that the coverage of Pope Francis’ arrival in Sri Lanka before his visit to the Philippines was “sooooo boring,” LJM’s marching order was: “Tell reporters their coverage should be in stark contrast.”

The Inquirer team later this year won the Catholic Mass Media Awards for its coverage of the papal visit.

But even ordinary stories got LJM’s special instructions. Her newsroom mantra was for reporters and editors alike to “advance the story” so that the paper won’t read like “yesterday’s news.”

“It’s the angling, the follow-up, the lead or the re-leading (that) make THE difference,” she would say.

“That’s why our stories are differentiated (from other media); they are written from the heart,” she said, summing up the journalistic outlook she had drilled into Inquirer reporters in her 24 years as editor in chief.

Not to mention the constant search for excellence that eschewed “puede na” (good enough).

The first thing LJM used to do when she arrived at the Inquirer editorial office was look over the front page being put together by Page One operations chief Nilo Paurom, who is familiar with LJM’s perfectionist streak.

“Tell Edwin (Bacasmas) to produce a photo, pronto! I don’t want to settle for puede na,” she would say when the photos were not good enough.

Yet LJM took no credit for her role in making the Inquirer flourish from being part of the “mosquito press” when she and its founder, Eggie Apostol, put it up during the waning days of the Marcos regime in 1985, to being the country’s most influential newspaper 30 years later.

Instead, she would throw the compliment back to reporters, editors and the Inquirer’s steadfast owners—its chair Marixi Prieto and her daughter Sandy Prieto-Romualdez, company president and CEO, who passed the test of independence when they stood up to President Joseph Estrada despite the crippling ad boycott campaign he had initiated in the early 2000s.

“You guys make me look good,” LJM would tell reporters awed by the fact that they had been mentored by a giant in Philippine journalism.

Indefatigable, with an energy that put her younger staff to shame, LJM was normally the last to leave the newsroom. While such punishing schedule eventually took its toll on her body, her spirit never wavered.

This was evident one memorable night in March 2013 when LJM and everyone in the newsroom had knocked off from their watch over the election of a new Pope after the resignation of Pope Benedict. The paper had been put to bed without a new Pope. But at 2 a.m., when white smoke came out of the Sistine Chapel chimney announcing the election of Pope Francis, LJM promptly came back to the office, stopped the presses, and splashed the story of Pope Francis’ election on the paper’s front page the following day. The other papers had to make do with no-Pope-yet headlines.

But more than her brand of gutsy journalism with a heart and fun-filled flair and her status as an icon of press freedom and democracy and kingmaker, it was LJM’s deep personal and affectionate connection with her Inquirer family that her staff and office colleagues will value most.

The ultimate cheerleader for her team, LJM always supported and rewarded good work. She fought for our needs—whether it be laptops or cell phone subsidies.

When life gave us lemons, she quickly turned them into life lessons.

I remember (shamelessly) unburdening myself to her over difficulties in my new position and receiving valuable counsel: “Take all the hits, they can only toughen you. That’s how life teaches us lessons. So not to worry, just celebrate lessons learned. Think New York!” she said, referring to my then upcoming attendance in a world media congress in New York.

She told me not to allow myself “to be bullied into attending meetings just because (I was) the new kid on the corporate block.”

“Meetings kill creativity,” she said. She later gifted me with Arianna Huffington’s book “Thrive: The Third Metric to Redefining Success and Creating a Life of Well-being, Wisdom and Wonder.”

When I told her about managing editor Joey Nolasco’s retirement letter written in August after he had logged 30 years with the paper, she shot back: “I hate the word retirement. I should do the moving on, not him.”

Our 30th anniversary book launch on Dec. 5 and our anniversary party on Dec. 9 were bittersweet affairs marked by her painful absence.

She last came to work on Dec. 5, already burdened by the back pains she had been enduring for the past year or so. Yet she stayed the usual late hours, working on the paper while the rest of the Inquirer staff were partying at Marriott Hotel.

Past midnight, reporter Nancy Carvajal and I went back to bring her some food. To complete our day, we had a selfie with her as she prepared to call it a day at 1:45 a.m. It was to be our last photo together, and the last time she would come to work.

On Dec. 9, the day our paper turned 30, when she was one of the pioneers to be honored, LJM was a no-show.

“My fracture from two years ago flared up last Friday and continues to this day,” she said via text message as we were again partying at the hotel in our best 1980s outfits.

She added: “There must be a lesson why I can’t be with you guys who have made the Inquirer what it is today. The heart has its reasons. I might turn the celebration into a crying session. For this day is full of meaning and sentiment for me. There’s pain when I sit or walk. I have to wait for the pain to subside. For sure, not today, and that pains me much more than the fracture ever can: the pain of separation from the roomful of people whom I love and treasure on a day we should be together more than ever.”

Those may be her last words before she left us, unbidden, on Christmas Eve. But for us in the Inquirer, there would be no final parting, no painful separation from the memories she had made with us.

The truth about journalism

Read Next
Prudence dictates tax policies–BIR
EDITORS' PICK
Congress canvassing of votes for president, VP to begin May 24
Luxe property: A way to build, preserve wealth
House energy committee chair Arroyo bats for cheap electricity
PH detects local transmission of Omicron subvariant BA.2.12.1
Honolulu Café is the cure for your Egg Tarts and Roastings cravings
Petition to reverse Comelec decision on Bongbong Marcos’ DQ case reaches SC
MOST READ
Heart Evangelista gets a ‘no’ from Chiz Escudero after asking, ‘Do I deserve a bag?’
CebuPac places pilot under disciplinary review after ‘baseless’ post vs Robredo
Closure order vs Megaworld Corp halted as firm vows cooperation with BIR – exec
Man posing as Marcos spox revealed to be an inmate in Bilibid — Guevarra
Don't miss out on the latest news and information.