A showy salute to Letty Jimenez-Magsanoc that night | Inquirer News 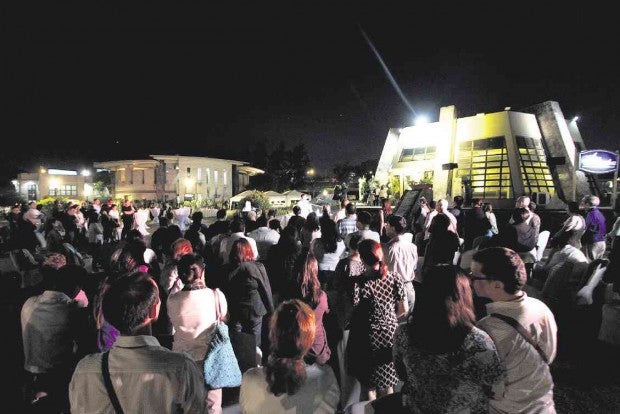 MOONLIT MOURNING A full moon and later a burst of fireworks light up the lawn at Heritage Memorial Park where mourners gather for the requiem Mass on Sunday night for Inquirer editor in chief Letty Jimenez-Magsanoc. RICHARD A. REYES

A rare full moon shone over the gold-tinged metal capsule that held the ashes of Inquirer editor in chief Letty Jimenez-Magsanoc during the outdoor Mass at Heritage Memorial Park in Taguig on Sunday night.

Around 8 p.m., as her ashes were brought to a makeshift altar on the lawn, a plane hovered in the starlit sky. Suddenly, a burst of fireworks lighted up the evening scene.

None of these were part of her family’s plan. They just happened. It was as if the moon, the stars and and fireworks-lit sky wanted to give a showy salute to Magsanoc, the editor in chief known simply as LJM to her staff and colleagues at the Philippine Daily Inquirer.

A former Inquirer columnist, Undersecretary Manolo Quezon III of the Presidential Communications Development and Strategic Planning Office, however, described Magsanoc in far grander words that would have embarrassed the editor who had always insisted that writing was never about the writer.

Quezon described the two types of practitioners in Philippine journalism: “The macho, hard-drinking, womanizing, barumbado (rude), traditional men, and the crusading women,” with Magsanoc being the “pinnacle” of the latter brand, “which was not prejudiced, was nurturing instead of ego-driven, familial, instead of dictatorial.”

The Malacañang official was among the hundreds who paid their last respects to Magsanoc on Sunday night, gathering around tiny cocktail tables on the lawn of Heritage Memorial Park, as they shared fond memories about the deceased.

Te recalled how he had met Magsanoc only once in a basic “hi, hello” encounter, but that he had always known of her “reputation” as a no-nonsense journalist since he used to read her columns in Panorama Magazine when he was younger.

“She wrote well and courageously,” Te said. “I have a few complaints on how things were written but generally, I admire the positions she had taken. And I think that reflected on the paper.”

He cited Magsanoc’s decision to fight the ad boycott initiated by then President Joseph Estrada against the paper for its highly critical views on his administration, and the paper’s prominent coverage of the 2009 Maguindanao Massacre.

Fellow journalist and editor Melinda de Jesus said Magsanoc had always had a “hard nose for the news.”

De Jesus recalled how she and Magsanoc were with the group, Women in Media, which held underground discussions and off-the-record interviews with officials and Malacañang insiders during martial law.

“I remember how she always wanted a special angle on what she was reporting,” said De Jesus, who heads the media watchdog group called Center for Media Freedom and Reporting.

“I don’t know how she did it,” her cousin, Fr. Reynaldo Jimenez, said during his homily, adding that what made Magsanoc stood out among the Jimenez cousins was her gift for remembering the little things and seeing the big picture.

“Among us cousins, she was the keeper of little things. She remembers details. A little here, a little there and then, lo and behold, ayan na! (it’s done) Maybe it’s a talent we should all nurture.”

Jimenez noted how the Inquirer, despite being relatively young, flourished under Magsanoc’s watch, and became No. 1.

“It’s not because [the paper] has a lot of stories. Well, maybe. But once you read the paper, you know may puso, may dating (it has heart and gravitas). The same news carried by other newspapers [are there], but the Inquirer approach is very human.”

Once, Magsanoc wrote about death, the priest recalled. “A year after her mother died, she said: ‘It is rather ironic that we set aside a day to remember our dead as though we ever forget,’” Jimenez added.

Comic impersonator Willie Nepomuceno, who was also at the wake on Sunday night, said the problem with LJM’s death was where to find “a replacement.”

“The country needs someone like her—if there’s anyone like her at all. We need journalists who are nationalists, someone who is willing to fight and die for her country. Saan tayo hahanap non? Kung mayroon man, lumabas na (Where do we find another one like her? Can they come out now?)” Nepomuceno said.

The loss, according to Quezon, comes from knowing that she was not only a good journalist but also a good mentor.

“[Her death] is going to lead to a gigantic soul searching. Because it defined everything. The snappy headlines? That’s her. Even the nose for the story, when to pursue it… . Remember how she would keep things [under wraps]? Then all of a sudden, there’s a story? And where the hell did that come from? Where are you going to find [that]?” Quezon asked.

The family has asked mourners to donate instead to ICanServe Foundation, instead of offering flowers.

A million thanks, LJM