Philippine Daily Inquirer chair Marixi Rufino-Prieto on Monday said the legacy of editor-in-chief Letty Jimenez Magsanoc before her death is the newspaper’s strength in continuing its tradition of fearlessness and independence.

In an interview during her visit to LJM’s wake at the Heritage Memorial Park in Taguig, Mrs. Prieto said she was shocked at the sudden passing of the Inquirer’s esteemed editor-in-chief.

“It was so sudden. It’s as if we were not really prepared for it. For Letty, it was a blessing because she didn’t go through much pain,” Mrs. Prieto said.

She said LJM’s training of the current Inquirer editors and staff was her legacy before her death – to pass on while leaving the Inquirer in good hands.

“I think she left the Inquirer in good hands. She’s been sick for a while… It’s as if she was training the people in Inquirer what to do when she’s gone,” Mrs. Prieto said.

“No one knew how sick she was. We all thought it was just her back that was bothering her… She really left a big void,” she added.

Mrs. Prieto said the Inquirer has a bench of young people trained well by LJM to take her stead. 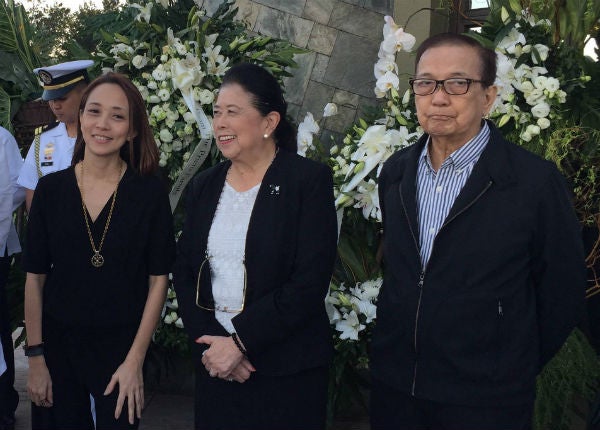 Inquirer chair Marixi Rufino Prieto with the Magsanoc family during the wake of Letty Jimenez-Magsanoc. Photo by Marc Cayabyab / INQUIRER.net

“There are a lot of young people in the Inquirer… The Inquirer will be there with the same fearlessness and balance,” Mrs. Prieto said.

Asked about her fondest memory of LJM, Mrs. Prieto said the Inquirer’s first woman chief asked her directly if the Prietos are holding any business or political interests.

“My personal knowledge with her when I first came in the Inquirer, the first thing she asked me was: ‘Do you have anyone to protect, business or politics?’ I said, ‘Wow, Letty!'” Mrs. Prieto said.

“I said we’re not into any big business and not affiliated to any politicians,” she added.

Mrs. Prieto said LJM has a “certain smack of getting the news, not afraid (for the story) to come out.”

“She has a mission to bring out the news not favoring anyone,” Mrs. Prieto said.

The Inquirer chair said LJM only left the Inquirer stronger even after her passing.

“The Inquirer will remain strong. That’s the legacy she will leave,” Mrs. Prieto said.

LJM was appointed editor-in-chief by the Inquirer founding chair Eugenia Apostol in 1991.

LJM has also become an icon of press freedom during the martial law. She has attributed the Inquirer in toppling the Marcos dictatorship, saying the Inquirer is the “keeper of the Edsa flame.”

Magsanoc, one of the founders of the Inquirer, passed away last Thursday, Christmas Eve, at St. Luke’s Medical Center Global City due to cardiac arrest.