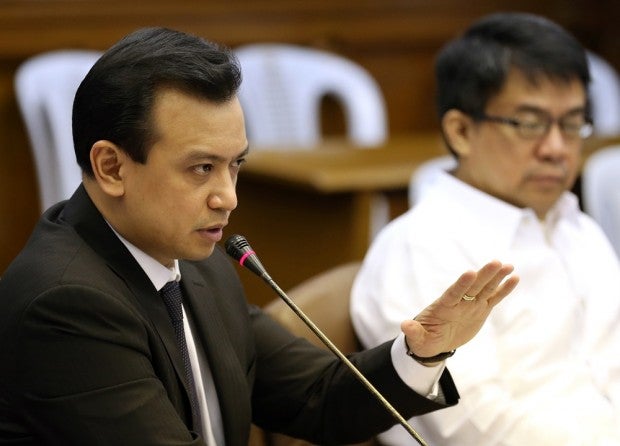 “There is already an order of probable cause,” Atty. Maricel Cairo, Makati RTC Clerk of Court said in a phone interview.

Asked if there is an arrest order from the court, she answered in the affirmative.

The case stemmed from the libel case filed against the senator by dismissed Makati Mayor Jejomar Erwin “Junjun” Binay.

The younger Binay filed a complaint for libel following Trillanes’ accusation that he bribed Associate Justices of the Court of Appeals’ 6th Division to stop the implementation of the first suspension order issued by the Office of the Ombudsman against him.

In his complaint, Binay said Trillanes, in an interview aired last April 2015 over several radio and television programs and in an article, publicly claimed that members of the 6th Division of the Court of Appeals were given bribes in millions of pesos in exchange for the favorable action on the petitions for a temporary restraining order and the writ of preliminary injunction.

Furthermore, Binay said Trillanes was quoted as saying that he and his family were “part of a syndicate” that has committed various crimes and irregularities.

He pointed out that Trillanes himself had admitted during the interview that he had no valid proof or factual basis for his pronouncements.

The dismissed mayor said that the acts of Trillanes in connection with the defamatory statements made against him constitute a violation of Article 355 in relation to Article 353 of the Revised Penal Code.

Trillanes countered the suit by saying he enjoys parliamentary immunity.

Meanwhile, in a statement, Atty. Claro Certeza, counsel for Binay said “the recent finding of probable cause for the indictment of Sen. Trillanes for libel is a clear vindication of what VP [Vice President] Binay has been saying all along—that the accusations made against him and members of his family are lies and politically motivated.”

“Now that the issues are being discussed in the proper forum, where the rules of fairness are observed, the truth is slowly coming out…Sen. Trillanes and his cohorts are clearly resorting to trial by publicity to destroy the reputation of VP Binay and derail his bid for the presidency. They have not produced any evidence that are legally acceptable to substantiate their charges,” Certeza added. RAM