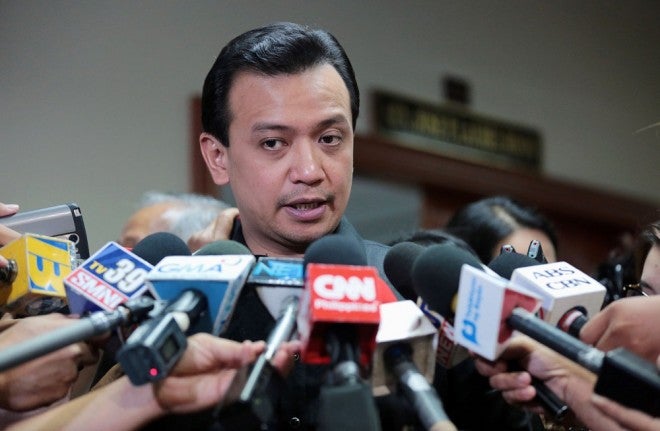 “Since the subject statements were made by the respondent in the performance of his pubic duties as a duly elected senator, the same are clearly covered by his parliamentary immunity as expressly provided in the 1987 Constitution,” Trillanes said in the 44-page counter-affidavit with motion to dismiss, that he filed Thursday at the Department of Justice.

The senator said his expose on the alleged bribery and the subsequent interviews he gave before the media about the matter were all part of many duties as member of the legislature, particularly oversight and investigation functions.

Binay’s lawyer Claro Certeza, for his part, criticized Trillanes’ failure to name the source of his information that two appeals justices got P25 million each from the Binay camp in exchange for the issuance of a temporary restraining order that stopped the Ombudsman from enforcing the six-month preventive suspension imposed on the mayor for alleged corruption.

“Our position has been, where is the evidence [of the bribery]? We will let the prosecutor decide on that,” Certeza told reporters after the preliminary investigation hearing.

“The senator’s defense of parliamentary immunity applies only to acts done as part of his official functions. And his official function is to legislate laws—not to investigate [anomalies] and determine who should be held liable. They can investigate in Congress, but when a lawmaker tags someone as a criminal or law breaker even without evidence yet, that’s a different story because that’s concluding already,” Certeza said.

In a separate interview, Trillanes insisted that he had basis in his bribery accusation and that he could first ask permission from the Supreme Court and CA before divulging his sources.

He pointed out that the appeals court’s ethics committee was already looking into his claims and that he was ready to cooperate with the ongoing internal investigation to detail the circumstance of the bribery.

“The information [about the bribery] was given to us by reliable sources. There are witnesses—that is my basis. I brought it out publicly because I believed it was my duty to our country and my obligation and mandate as senator. I believe that if I keep the information to myself, the problem won’t be solved, but if we expose it and it helped in the reform of the judiciary, then we have achieved our objective,” Trillanes said.

The senator said he is trying to convince the witnesses to come out publicly.

“There is still reluctance [by the witnesses] because their world will turn upside down if they do it. For me, however, if my expose would lead to reform in the judiciary, then all these troubles are worth it,” he said.