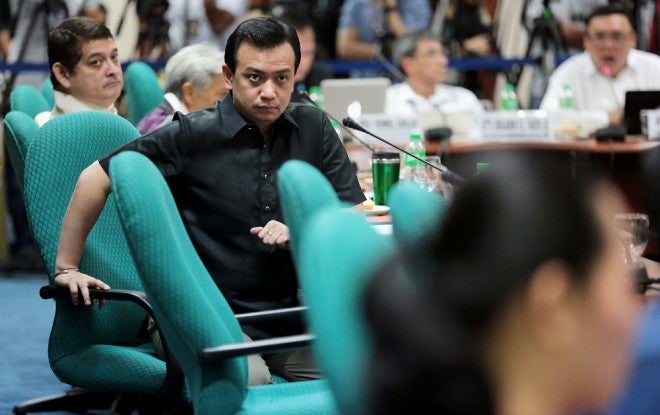 Citing parliamentary immunity and public welfare, Senator Antonio Trillanes IV asked the Department of Justice (DOJ) on Thursday to dismiss the libel case filed against him by suspended Makati Mayor Jejomar Erwin “Junjun” Binay on allegations that he spent P50-million to bribe two Court of Appeals (CA) justices to secure a stay order on his first preventive suspension over the allegedly anomalous construction of the Makati City Hall Building II.

In his 44-page counter-affidavit with motion to dismiss, Trillanes said he disclosed the information about the alleged bribery in his capacity as a senator and as author of Senate Resolution No. 826 which seeks probe on the alleged P1,601-billion overpricing of the Makati City Hall II Parking Building and other related anomalies.

“There can be no doubt that whatsoever that he did so in the performance of his official duties and functions as a member of the legislature,” Trillanes’ counter-affidavit stated citing Article VI, Section 11 of the 1987 Constitution.

Under the said provision “a Senator or Member of the House of Representative shall, in all offenses punishable by not more than six years imprisonment, be privileged from arrest while the Congress is in session. No member shall be questioned nor be held liable in any other place for any speech or debate in the Congress or in any committee thereof.”

“Since the statements of respondent Trillanes were clearly made in pursuance of his public duty as a Senator of the Republic, there can be no doubt whatsoever that the same are covered by the parliamentary immunity…accordingly, the immediate dismissal of the instant case is clearly in order,” the counter-affidavit stated.

Trillanes had accused Associate Justices Jose Reyes Jr. and Francisco Acosta of receiving P25 million each in consideration for the issuance of two orders that stopped the six-month preventive suspension of Mayor Binay.

Through Senate Resolution No. 1265, Trillanes urged the Senate Committee on Justice and Human Rights to investigate the alleged bribery.

Trillanes added that his statement is also covered by the fundamental rights to free speech, freedom of the press and free expression.

He added that if his action is libelous it would set a dangerous precedent because it would make members of the judiciary immune from public criticism.

On whether he has evidence against the CA justices, Trillanes said he has witnesses but are reluctant to surface.

He said he is coordinating with the CA’s internal investigation.

On Friday, Trillanes is required to appear before the CA on the contempt case filed by Mayor Binay.

The Senator said it is not his duty to present evidence.

(The hearing tomorrow is about contempt. They will have to probe why my statement was contemptuous. They should be the one to prove it, because my allegation will be heard in another forum.) IDL