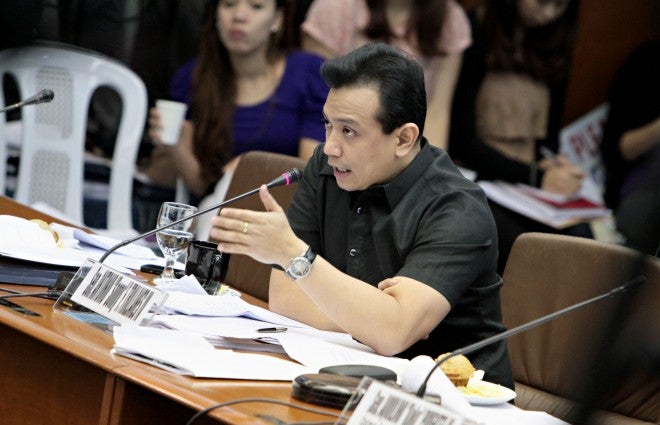 An unrepentant Sen. Antonio Trillanes IV on Tuesday shrugged off Binay’s libel complaint against him, saying it won’t stop him from pursuing corruption allegations against the Binays. INQUIRER FILE PHOTO/GRIG C. MONTEGRANDE

MANILA, Philippines–Makati Mayor Jejomar Erwin “Junjun” Binay Jr. has filed a libel complaint against Sen. Antonio Trillanes IV at the Makati prosecutor’s office, citing the “public and malicious” accusations that the senator allegedly made against him and his family.

In a complaint-affidavit, Binay said that Trillanes had “publicly and maliciously” accused him of bribery, graft, corruption and plunder during media interviews and in articles published in various newspapers.

After the Court of Appeals last week granted Binay’s plea for a preliminary injunction against the mayor’s six-month suspension ordered by the Ombudsman, Trillanes claimed that Binay had bribed the justices of the appellate court’s 6th Division with millions of pesos in exchange for the favorable ruling.

Trillanes alleged that the Binays—a deeply entrenched political family composed of patriarch Vice President Jejomar Binay, Sen. Nancy Binay, Rep. Abigail Binay and the Makati mayor—had paid P25 million each to Justices Jose Reyes Jr. and Francisco Acosta, two of the three appellate magistrates from the Sixth Division who had issued the ruling stopping the mayor’s suspension while under investigation for corruption.

Not a criminal syndicate

The pay-off was allegedly facilitated by lawyer Arthur “Pancho” Villaraza.

The magistrates and Villazara’s law firm have also denied the allegations.

The Makati mayor also denounced Trillanes’ reference to his family as a “syndicate that has committed various crimes and irregularities.”

“These are false, baseless and without factual basis as admitted by Trillanes himself,” Binay said. He claimed that during actual interviews the senator appeared “evasive” when asked about his source for his allegations.

“The damaging and ruinous claims spewed out by respondent Trillanes are mere concoctions and fabrications with no other purpose than to malign, discredit, ruin my reputation and besmirch my good name as well as that of my family,” Binay said.

Citing a 1995 Supreme Court ruling on a libel case involving columnist Emil Jurado, the mayor said that no “bona fide efforts” were made to know the truth of the statements before they made public “in reckless disregard of the truth, the presumption of malice applies as these article(s) are not privileged communication.”

Jurado, who wrote in his column that several judges received bribes from a public utility company, was found guilty of contempt of court by the high tribunal, which said that his accusations demonstrated gross irresponsibility. The high court also said that the “groundless accusations” against the judges interfered with the proper administration of justice. Jurado was fined P1,000.

Prompted by ‘ill will’

Binay also said in his complaint-affidavit that the “libelous statements” of Trillanes were prompted by “ill will” since they were made without any basis and “were not made in response to duty, but only with obvious intention to injure my reputation as well as those of my family”.

“They were clearly made with no good intention or justifiable motive,” Binay said.

The mayor said he has worked hard for years to build a reputation as a “competent, compassionate, propoor and hardworking public official.”

An unrepentant Trillanes on Tuesday shrugged off Binay’s libel complaint against him, saying it won’t stop him from pursuing corruption allegations against the Binays.

“He can do whatever he wants, but I will go after them until all of them who are corrupt are jailed,” he said in a text message.

“He is trying to scare the wrong man,” he said.

Trillanes, who initiated the months-long Senate blue ribbon subcommittee investigation into corruption in the Makati government allegedly involving the Binay family, last Monday filed a resolution seeking a Senate probe of the alleged pay-offs made to the appellate court justices.

In a radio interview on Tuesday, the senator said the legislative inquiry does not preclude any administrative investigation that the Supreme Court would initiate.

He said the Senate could coordinate closely with the Supreme Court in any administrative proceedings against the allegedly erring justices.

The Senate investigation is mainly for legislation, to prevent similar occurrences from happening in the future, as well as to inform the public how such things could take place, Trillanes said.

Sen. Aquilino Pimentel III, the chair of the Senate justice committee, said he anticipates that Trillanes’ resolution would be referred to his panel.

The resolution asked that the probe be handled by the committee on justice and human rights, though Pimentel noted that the matter could be referred to the blue ribbon committee as well.

If the matter is referred to the justice committee, Pimentel said he would invite the Presiding Justice of the appellate court as well the members of the sixth division to the hearings.

In inviting the Presiding Justice, he said he wants to ask about the rules and procedures of the court in handling petitions or documents, and what the actual practices are.

Pimentel also chairs the blue ribbon subcommittee that is handling the inquiry on alleged irregularities in Makati.

Meanwhile, a Binay lawyer said Trillanes showed disrespect for the principle of due process and equality of the three branches of government when he accused the two of the Court of Appeals justices of receiving bribes.

“(Trillanes) is willing to sacrifice the pillars of democracy and due process before the altar of political expediency. He has become so desperate that he disregards the efforts of the judiciary to win the people’s trust and confidence,” said Rico Quicho, the vice president’s spokesman on political concerns.

“Senator Trillanes should stop acting that he is above the law and should realize that the rule of law still prevails,” he said.–With Niña P. Calleja