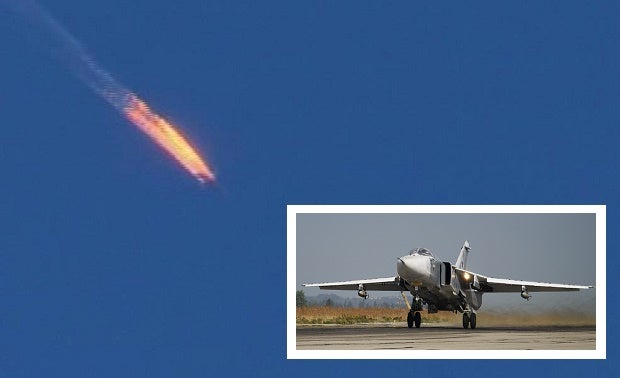 This frame grab from video by Haberturk TV, shows an earlier incident of a Russian warplane on fire before crashing on a hill as seen from Hatay province, Turkey, Tuesday, Nov. 24, 2015. Turkey shot down the Russian warplane claiming it had violated Turkish airspace and ignored repeated warnings. On Saturday, NATO warned Russia after another one of its warplanes allegedly intruded into Turkish airspace. AP

“I call on Russia to act responsibly and to fully respect NATO airspace. Russia must take all necessary measures to ensure that such violations do not happen again,” Stoltenberg said in a statement.

“Previous incidents have shown how dangerous such behavior is,” he said.

READ: Turkey says patience with Russia has its limits | Russia confirms its jet shot down near Turkish border

In November, Turkey shot down a Russian fighter jet on the Syrian border, sparking a war of words with Russia which insisted its plane had not violated Turkish airspace.

As in the November crisis, Stoltenberg called for “calm and deescalation,” welcoming contacts between Ankara and Moscow.

At the same time, he made absolutely clear that NATO would stand by Turkey, the second largest military power in the alliance after the United States.

“NATO stands in solidarity with Turkey and supports the territorial integrity of our ally, Turkey.”

He recalled that the 28-nation alliance had agreed in December to help bolster Turkey’s defenses with the deployment of AWACS early warning and surveillance aircraft but added the caveat that this decision predated the latest incident.

Ankara called in the Russian ambassador on Friday “to strongly protest and condemn” the latest alleged violation of its airspace.

“We stress once again that all the responsibility for any unwanted grave consequences as a result of any such irresponsible behavior will belong entirely to the Russian Federation,” the Turkish foreign ministry said.