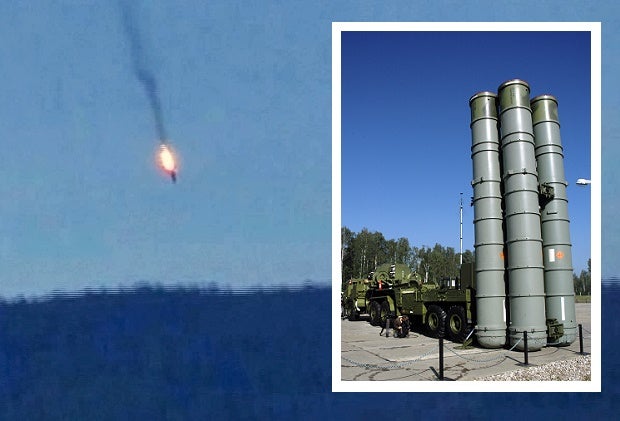 This Nov. 24, 2015 frame grab from video by Haberturk TV, shows a Russian warplane on fire before crashing on a hill as seen from Hatay province, Turkey. The Russian plane shot down by Turkey on Tuesday was operating over the Turkmen Mountain region in Syria’s Latakia province. Following the downing, Russian President Vladmir Putin ordered the deployment to Syria of advanced S-400 anti-aircraft missiles (right) to deter Turkey. AP

MOSCOW, Russia — In a move raising the potential threat of a Russia-NATO conflict, Russia said Wednesday it would deploy long-range air defense missiles to its base in Syria and destroy any target that may threaten its warplanes following the downing of a Russian military jet by Turkey.

The incident was the first time in half a century that a NATO member shot down a Russian plane. If Russia responds by downing a Turkish plane, NATO member Turkey could proclaim itself under attack and ask the alliance for military assistance.

Most observers believe that a direct military confrontation is unlikely, but that the shooting down of the plane will further fuel the Syrian conflict and complicate international peace efforts.

The situation is also alarming because the Russian and Turkish presidents both pose as strong leaders and would be reluctant to back down and seek a compromise.

The S-400 missiles, which Russian President Vladimir Putin ordered sent to the Hemeimeem air base in Syria’s coastal province of Latakia, just 50 kilometers (30 miles) away from the border with Turkey, are capable of striking targets within a 400-kilometer (250-mile) range with deadly precision. The military also moved the navy missile cruiser Moskva closer to the shore to help protect Russian warplanes with its long-range Fort air defense system.

“It will be ready to destroy any aerial target posing a potential danger to our aircraft,” Russian Defense Minister Sergei Shoigu said at a meeting with military officials. He also announced the severance of all military ties with Turkey and said that from now on, Russian bombers will always be escorted by fighters on combat missions over Syria.

Ozgur Unluhisarcikli, director of the German Marshall Fund in Ankara, said it is possible Russia could down a Turkish plane.

“Turkish planes violate the Syrian border daily, either for reconnaissance flights or for anti-IS operations,” he said. “In the same way that Turkey argues it has rules of engagement, Russia could also declare its own rules of engagement, saying it has the right to protect the skies of its ally.”

The Russian plane’s downing marked a dramatic turnaround in relations between Russia and Turkey, who have proclaimed themselves to be “strategic partners” in the past and developed booming economic ties despite differences over Syria.

Putin described the Turkish action as a “crime” and a “stab in the back,” and called Turkey an “accomplice of terrorists.” In a sign of the escalating tensions, protesters in Moscow hurled eggs and stones at the Turkish Embassy, breaking windows in the compound. Police cleared the area and made some arrests shortly after the protest began.

Turkish President Recep Tayyip Erdogan, who has often been compared to Putin for his authoritarian ways, said Wednesday that his country doesn’t wish to escalate tensions with Russia.

Speaking at an Organization of Islamic Cooperation economy meeting in Istanbul, Erdogan said Turkey favors “peace, dialogue and diplomacy.” He defended his country’s move to shoot down the plane saying: “No one should expect Turkey to stay silent to border violations or the violation of its rights.”

Putin has dismissed Turkey’s claim that the Russian warplane intruded its airspace, voicing particular annoyance about Ankara turning to NATO instead of speaking to Russia, “as if it were us who shot down a Turkish plane.”

NATO Secretary-General Jens Stoltenberg in turn said that the downing of the plane “highlights the need to strengthen mechanisms to avoid such incidents in the future.”

“We should not sleepwalk into unintended escalation,” he wrote in an op-ed that is to be published Thursday and was made available to The Associated Press.

Iran meanwhile lashed out at Turkey, with the official IRNA news agency quoting President Hassan Rouhani as saying Ankara is responsible for the heightened tensions in the region.

One of the Russian pilots was killed by militants in Syria after bailing out, while his crewmate was rescued by Syrian army commandos and delivered in good condition to the Russian base early Wednesday. A Russian marine was also killed by the militants during the rescue mission.

Speaking in televised comments from the Russian base in Syria, the surviving navigator of the downed plane, Capt. Konstantin Murakhtin, denied that his jet veered into Turkey’s airspace “even for a single second.” He also rejected Turkey’s claim that it had issued repeated warnings to the Russian crew before shooting down the plane.

Putin said the Foreign Ministry’s warning for Russians not to visit Turkey was needed “because we can’t exclude some other incidents following what happened yesterday and our citizens in Turkey could be in significant danger.”

Leading Russian tourist agencies have already suspended the sales of tour packages to Turkey, a significant blow to the country, which saw nearly 4.5 million Russian visitors last year, second only to German tourists.

Osman Ayik, the head of the Turkish Hoteliers Federation, told Taraf newpaper Wednesday that a decline in Russian tourists visiting Turkey would be a “disaster” for the tourism sector.

If Russia-Turkey tensions escalate further, both countries potentially could inflict significant pain on each other in many areas.

Russia was the biggest source of Turkish imports last year, worth $25 billion, which mostly accounted for Russian gas supplies. Most Turkish exports to Russia are textiles and food, and Turkish construction companies have won a sizable niche of the Russian market.

Unluhisarcikli said that along with economic moves, Russia may also increase its support to Syrian Kurdish groups, which have been fighting against IS but not against the Syrian regime. So far, Russia has refrained from doing so as not to anger Turkey, but now it could go ahead with plans to open an office in the Syrian Kurdish regions and supply arms to the fighters, Unluhisarcikli said.

Analysts said Turkey doesn’t have the option of closing the Turkish Straits to Russia, which has used the route that connects the Black Sea to the Mediterranean to supply its forces in Syria. According to the Montreux Convention, which sets out international rules for using the straits, Turkey can only make the move if the two countries are formally at war.

Even if Russia downs a Turkish plane, Ankara can’t close the straits unless it formally declares war on Moscow, according to Giray Sadik of Ankara’s Yildirim Beyazit University.

Turkish Prime Minister Ahmet Davutoglu sought to ease tensions Wednesday, calling Russia Turkey’s “friend and neighbor” and insisting relations cannot be “sacrificed to accidents of communication.” He told his party’s lawmakers that Turkey didn’t know the plane was brought down Tuesday was Russian until Moscow announced it.

Turkey has informed the United Nations that two Russian planes disregarded warnings and violated Turkish airspace “to a depth of 1.36 miles and 1.15 miles in length for 17 seconds.”

Russia’s Foreign Minister Sergey Lavrov shrugged off the Turkish argument that its rules of engagement required it to shoot down the plane, pointing at the 2012 downing of a Turkish warplane by Syria in its airspace. He said Ankara argued in that case that a brief incursion wasn’t reason to shoot down its jet. He also pointed at routine violations of Greece’s airspace by Turkish combat planes.

He said the Turkish action was a “planned provocation” and rejected his Turkish counterpart’s proposal to meet at the sidelines of some international forum in the coming days to try to ease tensions.

Before Tuesday’s incident, Russia and the West appeared to be inching toward joining efforts to fight the Islamic State group following the Nov. 13 attacks in Paris and the Oct. 31 bombing of a Russian airliner over Egypt’s Sinai desert. The Islamic State group claimed responsibility for both attacks.

The downing of the warplane came as French President Francois Hollande was visiting Washington prior to a trip to Moscow set for Thursday in a bid to narrow the rift between the West and Russia and agree on a joint action against the IS.

“On NATO’s side, I think there is a strong desire not to jeopardize the diplomatic mission of President Hollande,” said Bruno Lete, a senior analyst at the German Marshall Fund in Brussels.

Lavrov said that Russia remains committed to efforts to try to negotiate a Syria peace deal, but emphasized the need to take action against the Islamic State group’s sponsors. He accused Turkey of helping IS by buying oil from the group, and said that “terrorists” used Turkish territory to prepare terror attacks against other countries, which he didn’t name.