Republican rivals mock Trump, try to make most of absence 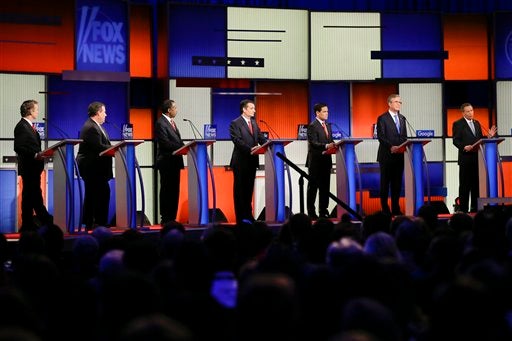 DES MOINES, Iowa— Republican presidential candidates strained to take advantage of a rare opportunity to step out of front-runner Donald Trump’s shadow in Thursday night’s debate — a policy-heavy contest that offered a glimpse of what the party contest might have been without the unpredictable businessman.

Still, the candidates couldn’t resist mocking Trump for boycotting the final debate before voting kicks off in the 2016 campaign on Monday. That’s when Iowa residents will choose among the Republican and Democratic candidates in the first of a series of state-by-state contests to choose delegates to each party’s convention.

Texas Sen. Ted Cruz, who is locked in a tight contest with Trump in Iowa, opened the debate with a sarcastic impression of the real estate mogul’s frequent insults of his opponents.

“I’m a maniac and everyone on this stage is stupid, fat and ugly,” Cruz said. Then he thanked his fellow candidates for showing Iowa voters respect by showing up.

Former Florida Gov. Jeb Bush, a frequent target of Trump, said with a wry smile, “I kind of miss Donald Trump; he was a teddy bear to me.”

Never one to go quietly, Trump was holding a competing rally elsewhere in Des Moines, an event his campaign said was raising money for military veterans.

READ: Trump: I could shoot someone and not lose votes

Trump’s absence put the spotlight on Cruz, who is challenging for the lead in Iowa, as well as on Florida Sen. Marco Rubio, who needs a strong showing in the state to stay competitive.

The two senators engaged in a lengthy debate on immigration, one of the most contentious issues among Republicans. Both have been accused of shifting their stances on legalizing some of those in the United States illegally, a position opposed by many GOP voters.

Cruz accused Rubio of making a “politically advantageous” decision to support a 2013 Senate bill that included a pathway to citizenship, while the Florida senator said his rival was “willing to say or do anything to get votes.”

In a rare standout debate moment for Bush, the former Florida governor sharply sided with Cruz in accusing Rubio of having “cut and run” on the Senate immigration bill.

“He cut and ran because it wasn’t popular with conservatives,” Bush said.

With their White House hopes on the line, the candidates worked hard to cast themselves as best prepared to be commander in chief and take on terror threats emanating both from abroad and within the United States.

Rubio struck an aggressive posture, pledging that as president he would go after terrorists “wherever they are. And if we capture them alive, we’re sending them to Guantanamo.” Rubio also stood by his previous calls for shutting down mosques in the U.S if there were indications that the Muslim religious centers were being used to radicalize terrorists.

Kentucky Sen. Rand Paul — back on the main debate stage after being downgraded to an undercard event because of low poll numbers earlier this month — warned against closing down mosques. A proponent of a more isolationist foreign policy, Paul also raised concerns about the U.S. getting involved militarily in Syria, where the Islamic State group has a stronghold.

The candidates largely sidestepped direct confrontations with each other, focusing some of their most pointed attacks on Democratic front-runner Hillary Clinton.

“She is not qualified to be president of the United States,” New Jersey Gov. Chris Christie said. “What we need is someone on that stage who has been tested who has been through it.”

Christie is part of a crowded field of more mainstream candidates who have struggled to break through in an election year where Trump, and increasingly Cruz, have tapped into voter anger with the political system. Party leaders have grown increasingly antsy for some of the more traditional candidates to step aside after the first contests to allow one to rise up and challenge for the nomination.

Asked whether the crowded establishment lane was putting Trump in position to be the nominee, Bush said, “We’re just starting out. The first vote hasn’t been counted. Why don’t we let the process work?”

Bush also defended the flurry of critical advertisements his well-funded super PAC has launched against Rubio and other rivals.

Trump pulled out of the debate this week, citing unfair treatment from host Fox News. He’s feuded with the network for months, particularly anchor and debate moderator Megyn Kelly.

It’s unclear whether Trump’s unusual move will hurt his standing with Iowa voters. But his absence did give his rivals more time to make their case to voters.